the succession of the forte_forte openings expands with new lemmas the idea of retail space stemming from the dialogue between giada forte and robert vattilana. the grammar of materials and forms is further enriched and modulated with each new chapter, defining a system that is both recognizable and constantly evolving, in which style and composition derive from the observation of the place, meant as a spatial, urban and geographical entity.
thus, the architectural language takes on local inflections, specific accents, without ever becoming a dialect. the opening in forte dei marmi, a holiday resort glistening with golden beaches against the backdrop of the apuan alps, is an opportunity to work on unprecedented balances and harmonious contrasts, combining for the first time wood, organic and redolent with nautical memories, with the metals and the minerals that are the defining elements of the forte_forte materiality.

located at number 13 of piazzetta tonini, in the city center, open to the outside with a full–width glass door that lets in the light in, the space develops, high and deep; following a square section, rhythmically marked by an intertwining of light, angular and softly–veined wooden poles creating a succession of five portals.
these simple structures articulate the space, visually, combining the solemnity of a basilica and the functionality of a hull. the rhythm of the weaves is punctuated by notes of gold leaf, accents of an essential and vibrant melody, metallic rises that interact once again with the light. walking through the space, one is enveloped and caressed by the soft light that expands on the wooden structures and creates a movement of discovery of the garments and the environment, modulated in an upward flow of shades.

the floors, made of an invented mineral, are an agglomeration of gray concrete and white stone with the appearance of salt crystals and deep jade green crystals. they dialogue with the warmth of wood, and contrast with the hand–treated walls in a powder–colored stucco. calligraphic hangers in ground brass, anchored to the ground as well as to the ceiling, run along the walls to display the products. the furniture consists of a triptych mirror of modernist design; like a fresh and welcoming courtyard, the center of the room is occupied by a solid round bench and a cloud vase containing a plant with giant leaves. a cantilevered display in brass marks the entrance.

as intimate as a boudoir, the dressing rooms at the back of the shop, positioned under the mezzanine and divisible thanks to a movable curtain, insert the silky note of velvet into the story: gold on the outside, teal on the inside, seats, and carpets. a rotating mirror accentuates the intimacy of the area.
the brass cash desk, also placed under the mezzanine, is a shiny block covered with gold leaf. the mezzanine itself is set high in the space, a volume of pure sheen. behind the full–height door, bright with gold, is the private stairwell, in a delicate shade of sage green.

the space tells a story that is both rational and emotional, marine in its echoes, refracted in the eclectic interweaving of colors and elements. 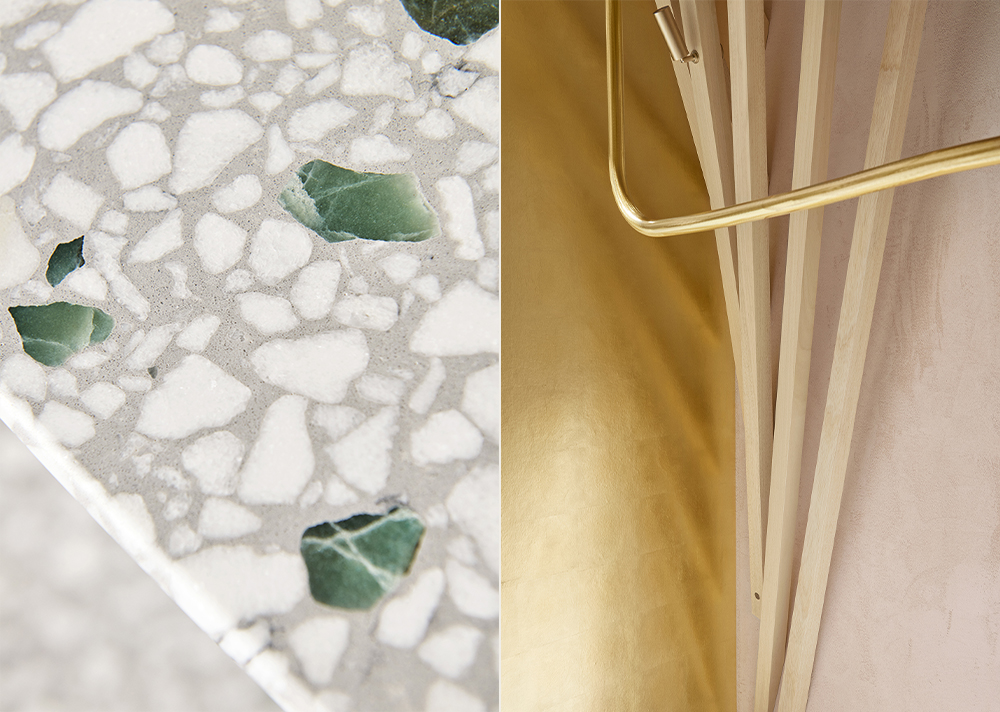 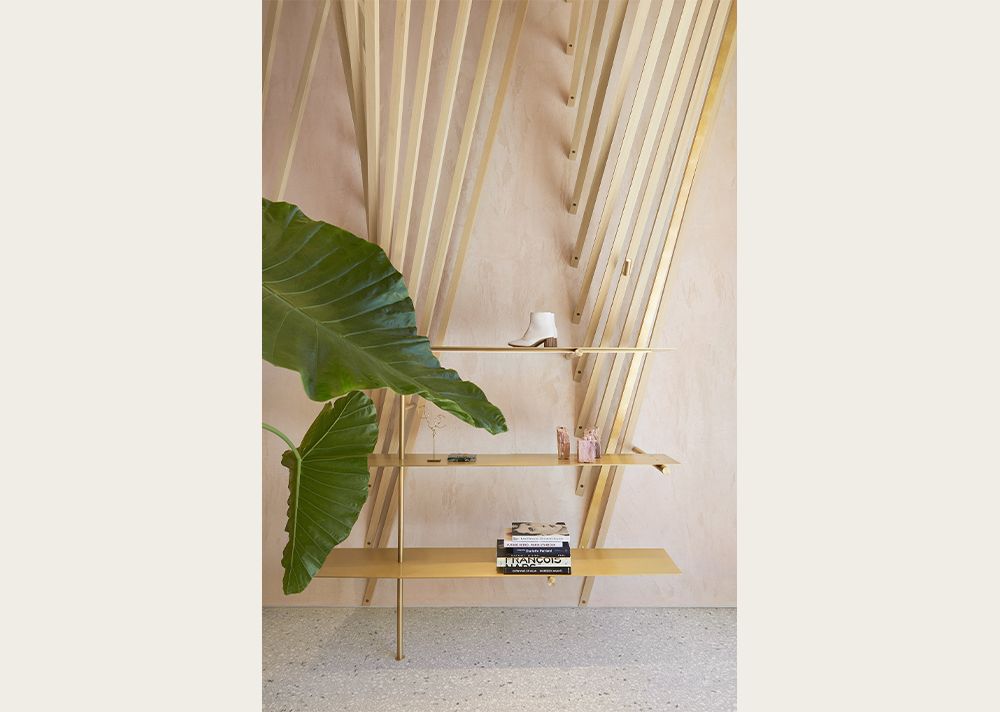 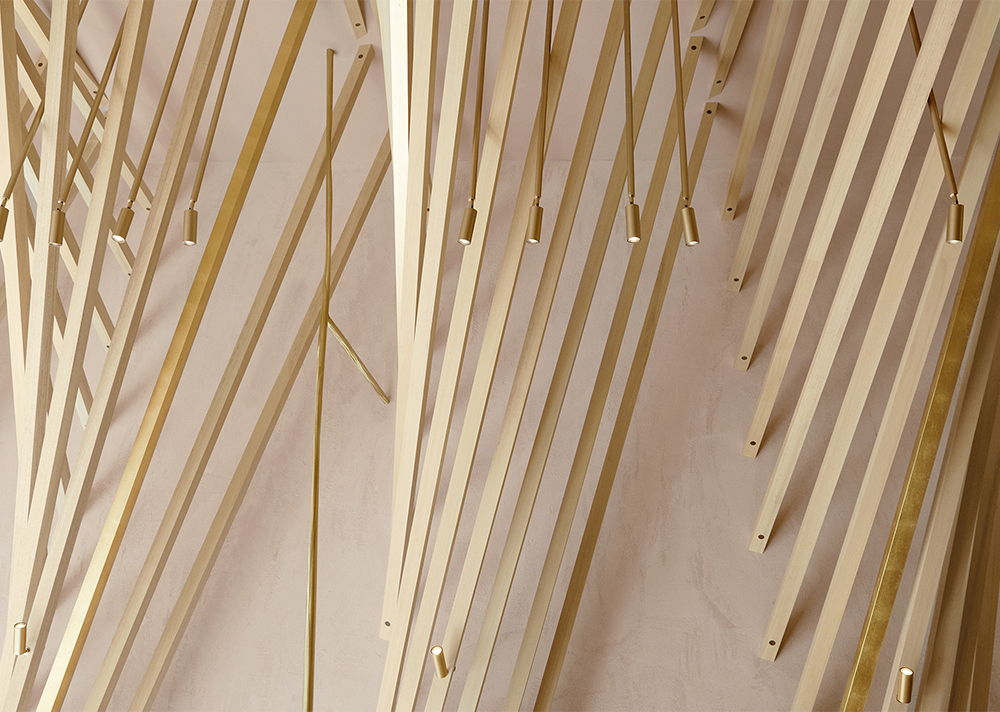 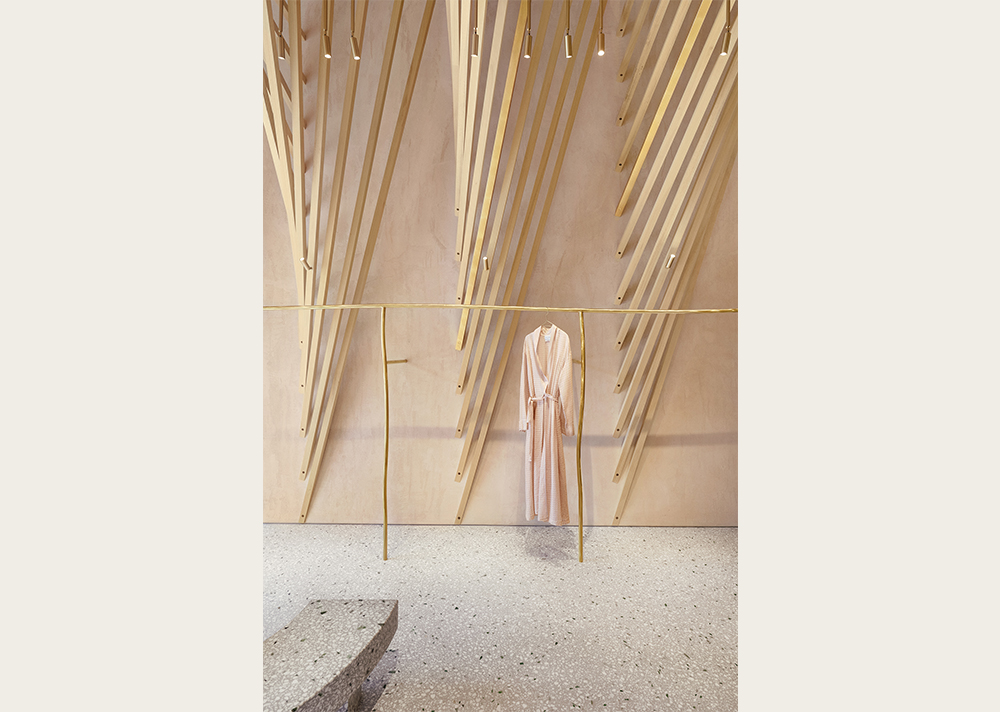 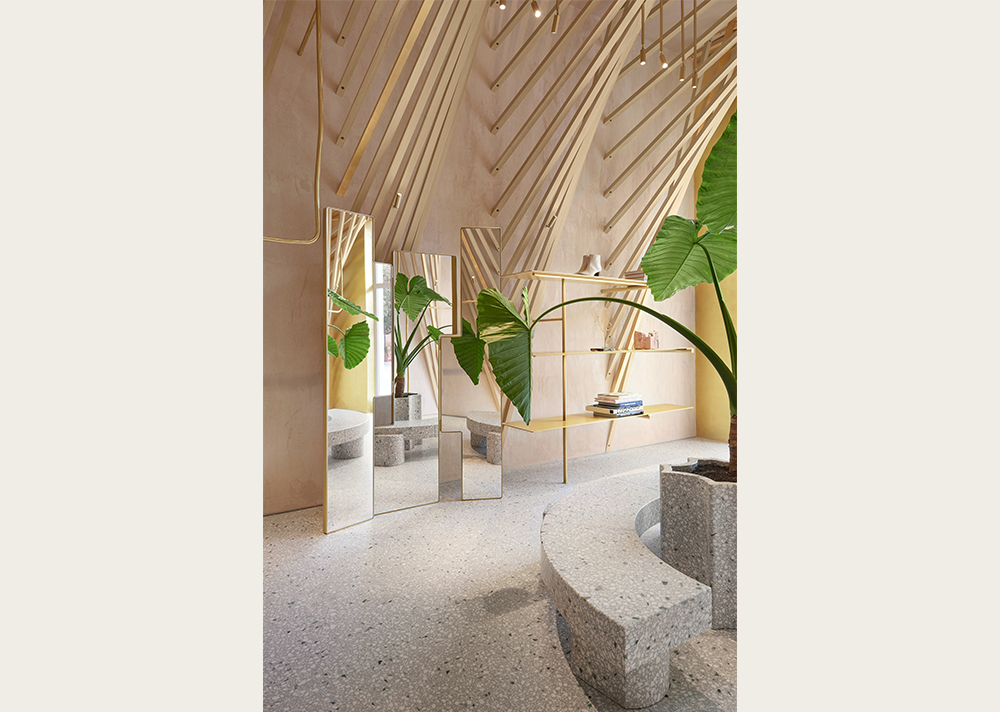 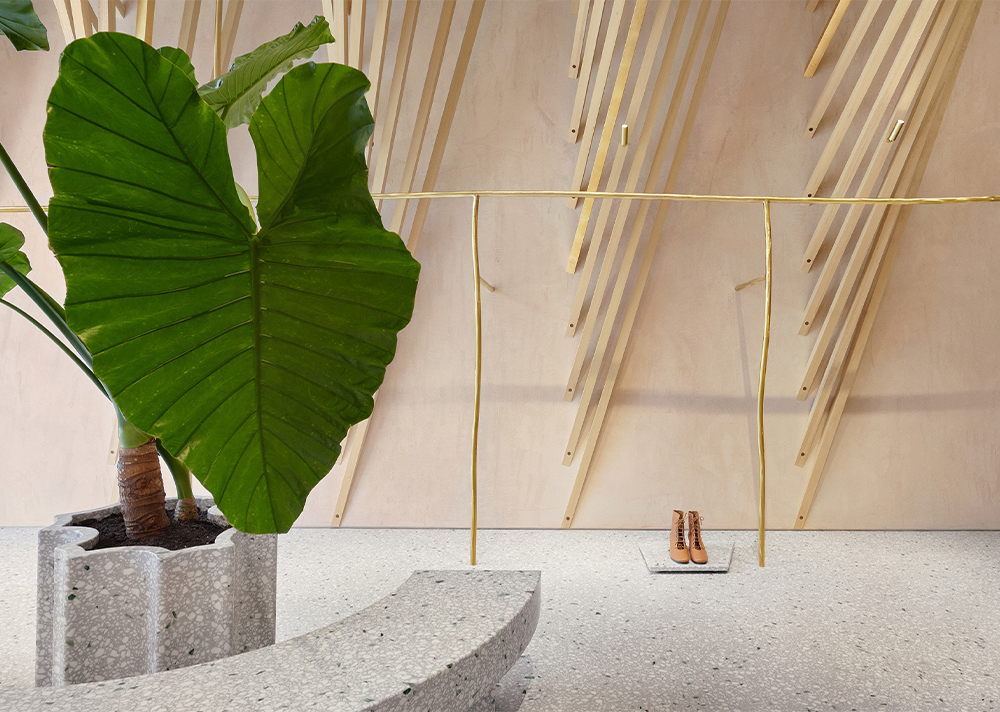 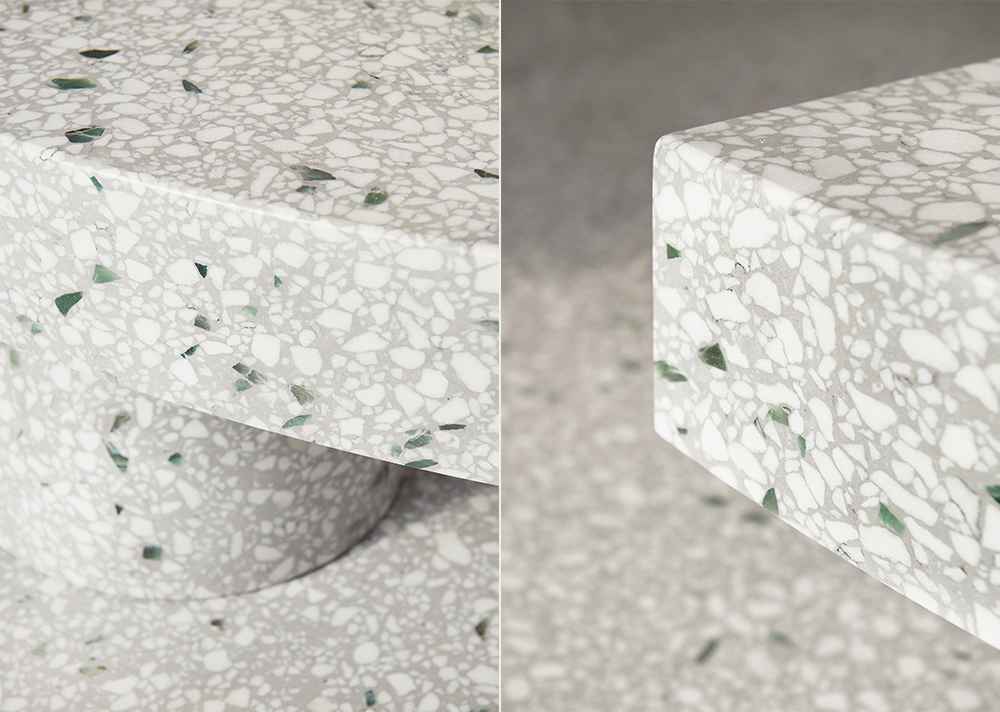 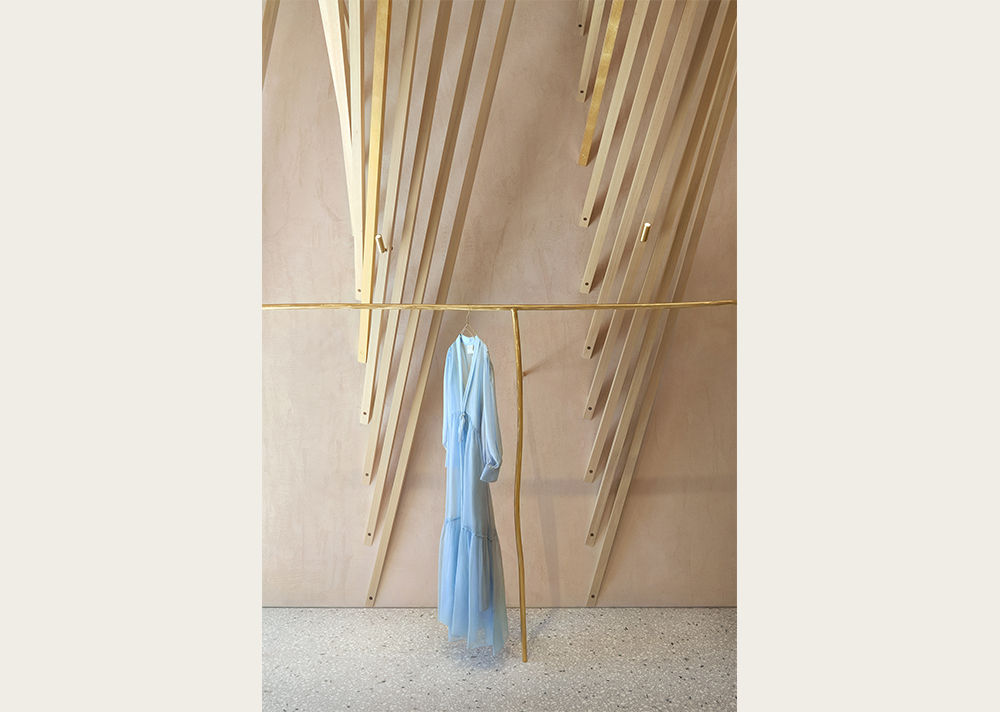 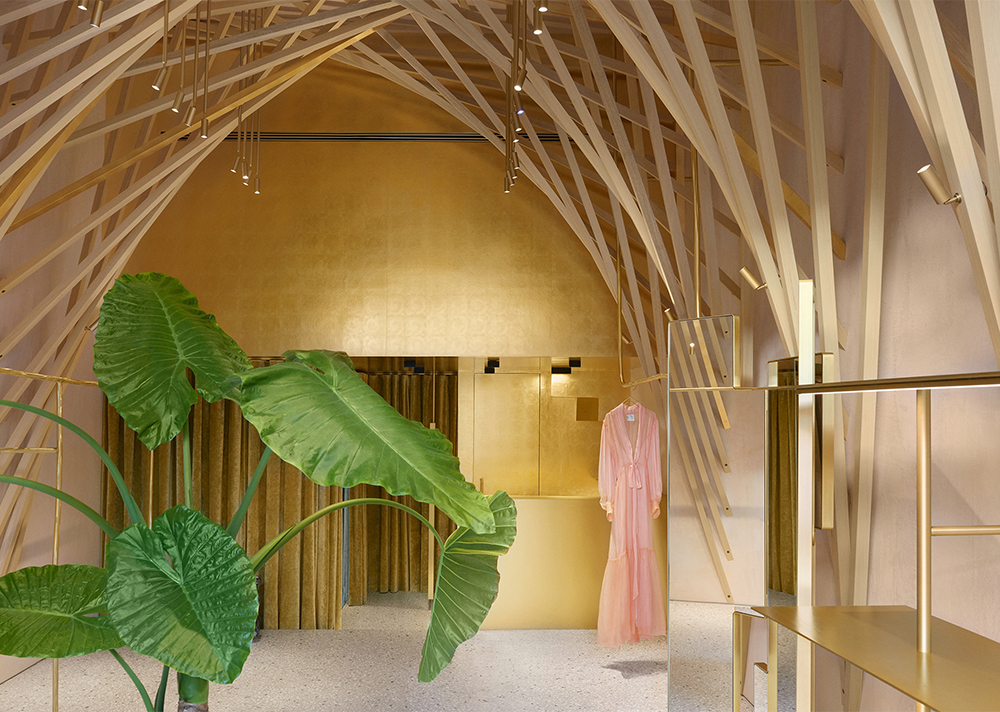 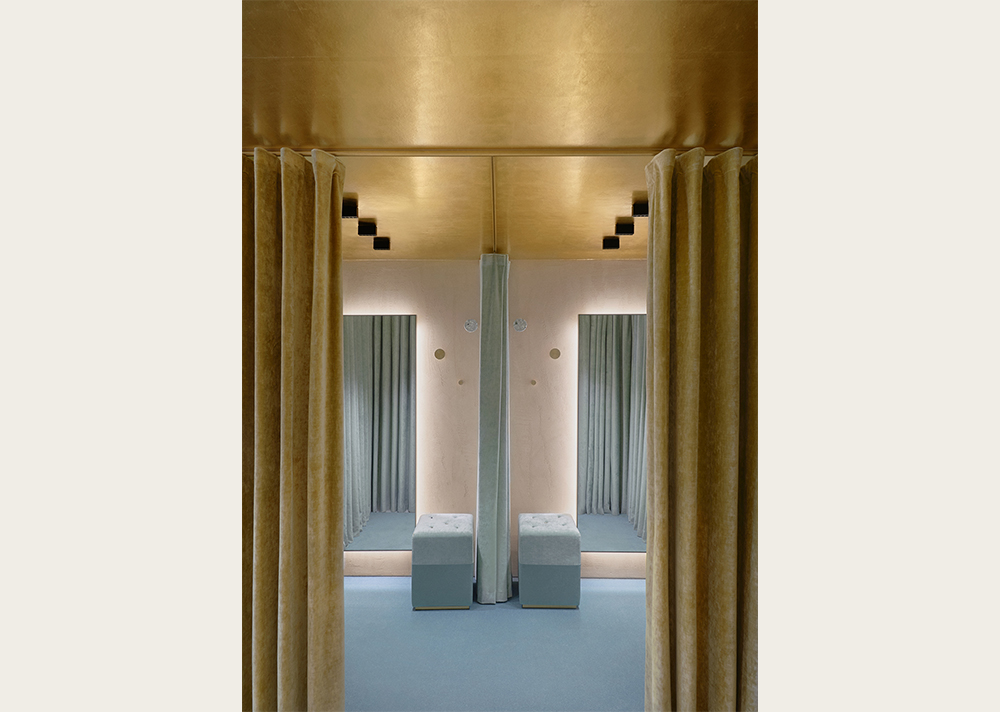 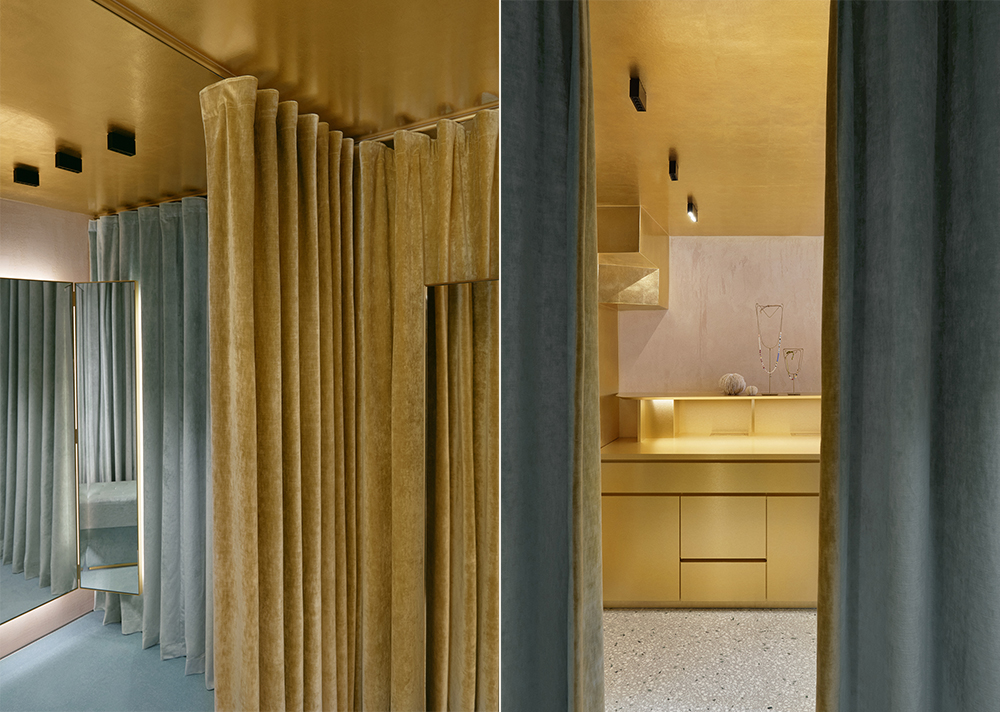 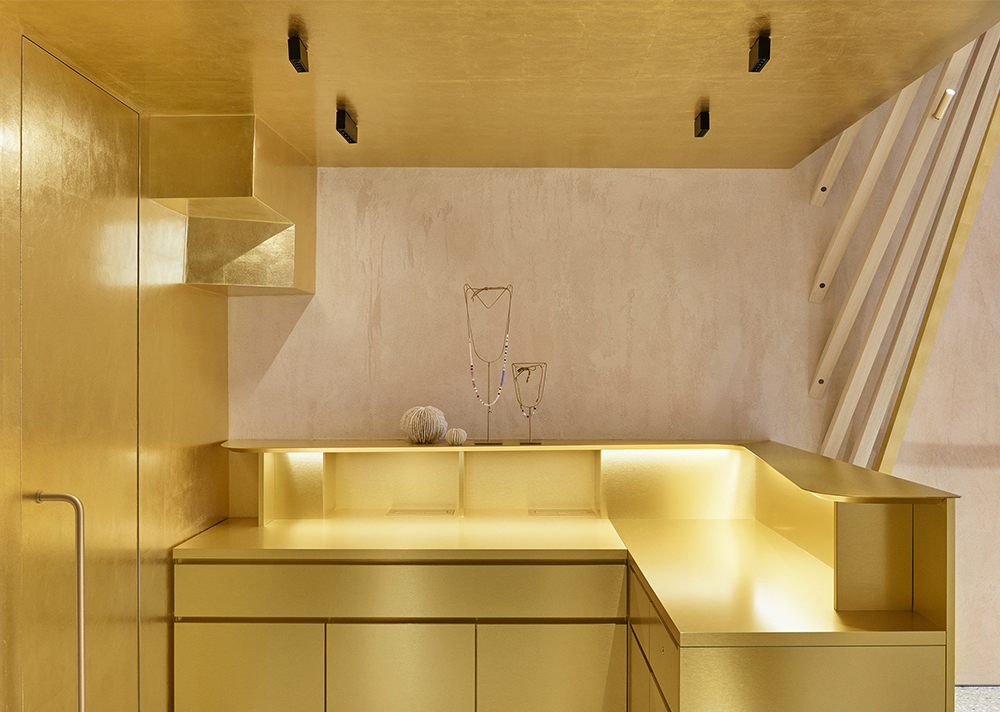 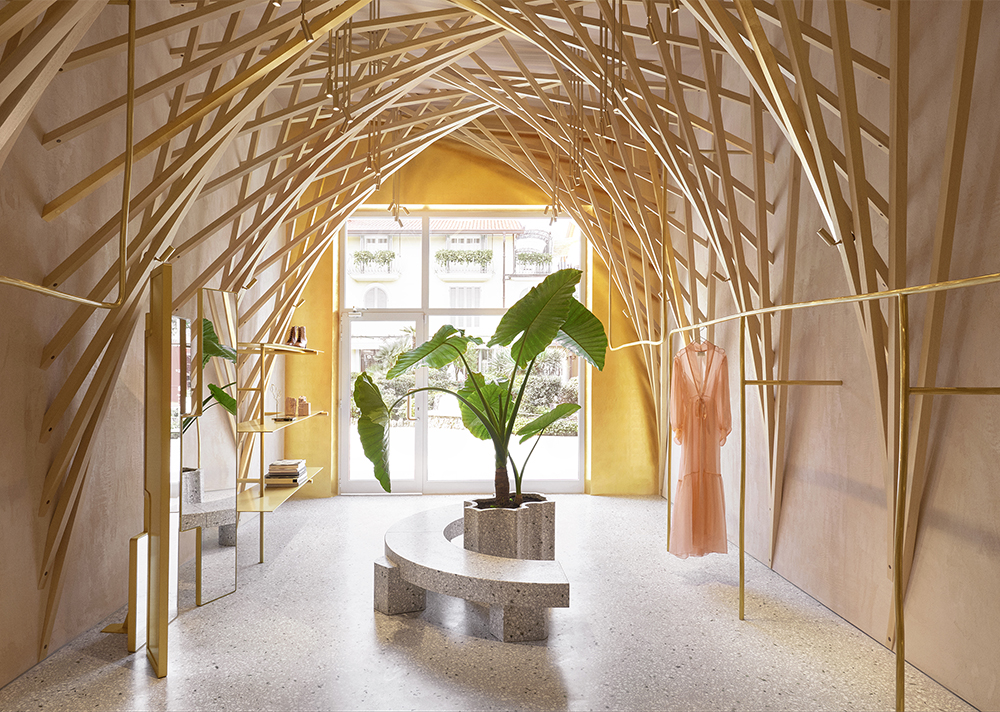 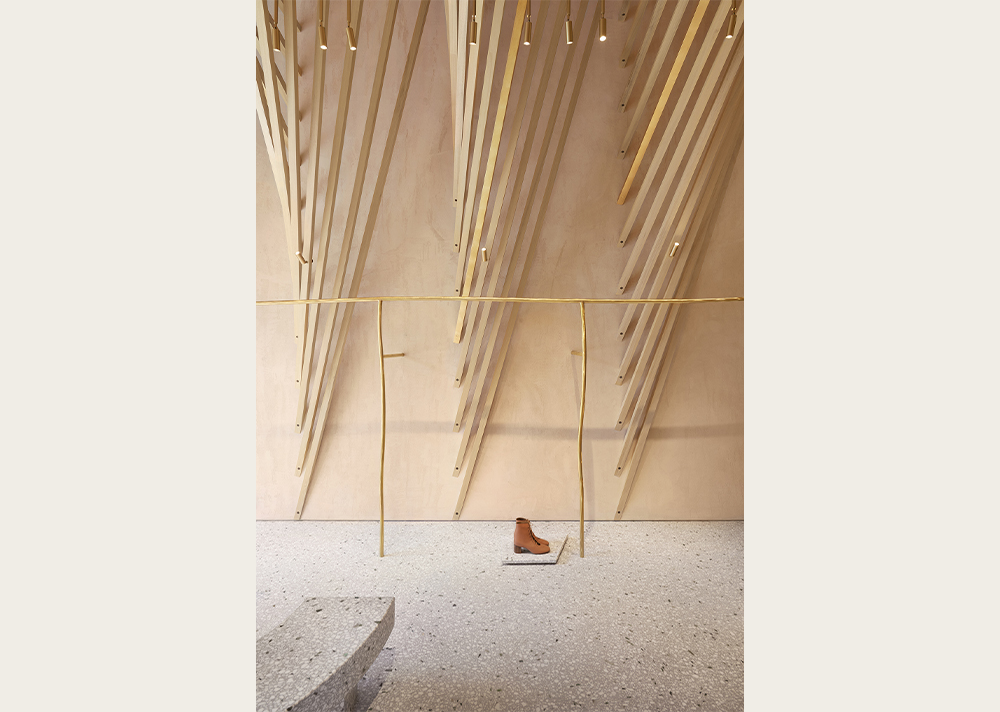 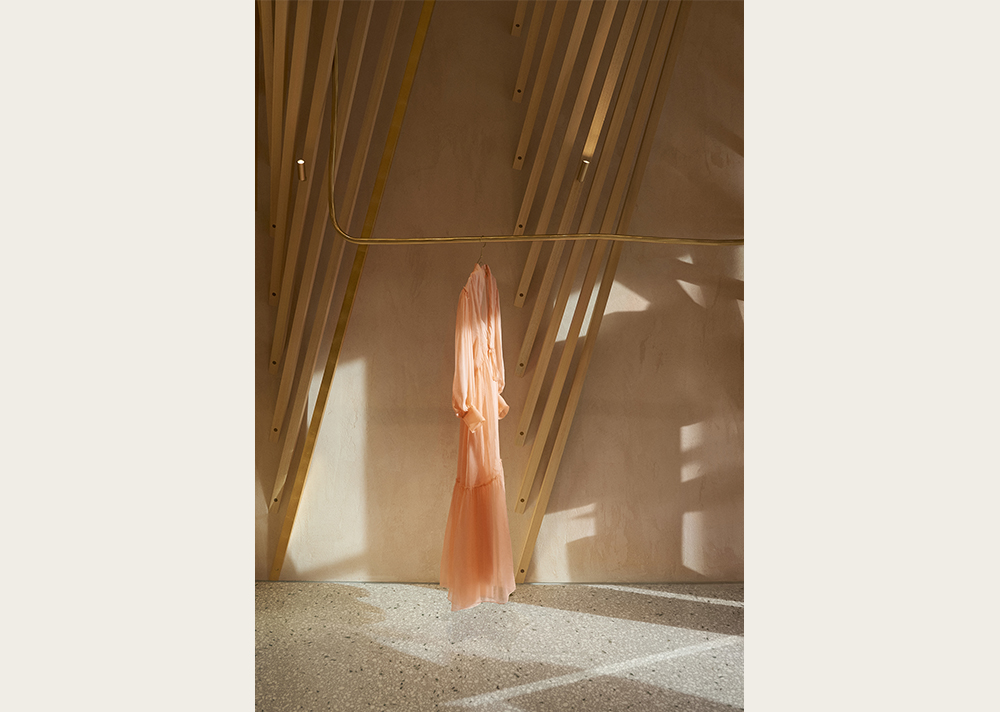 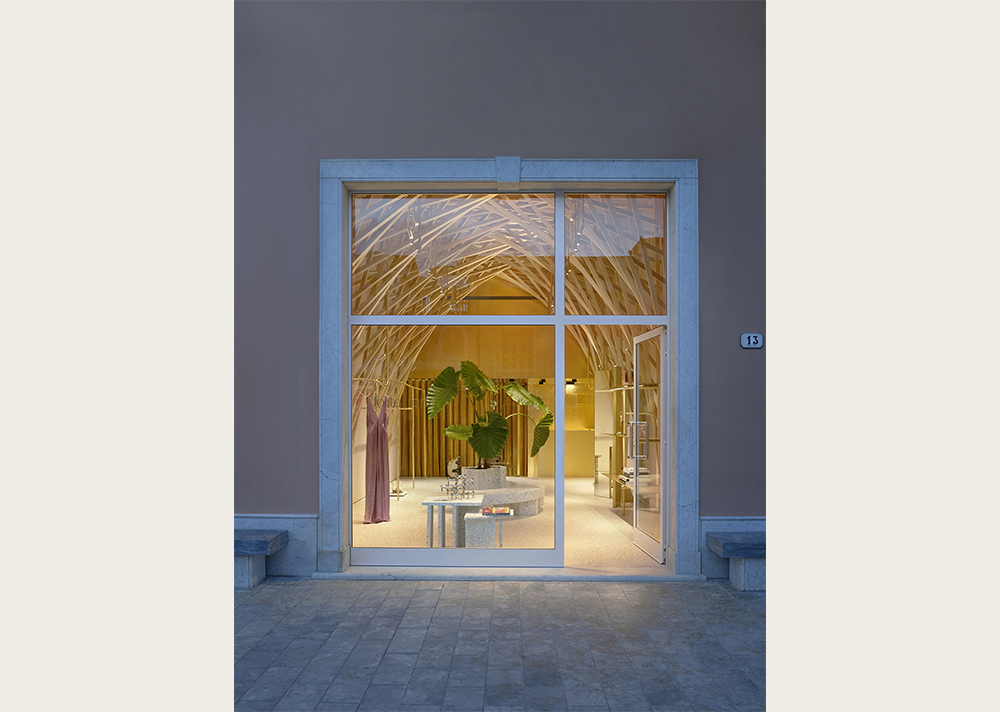 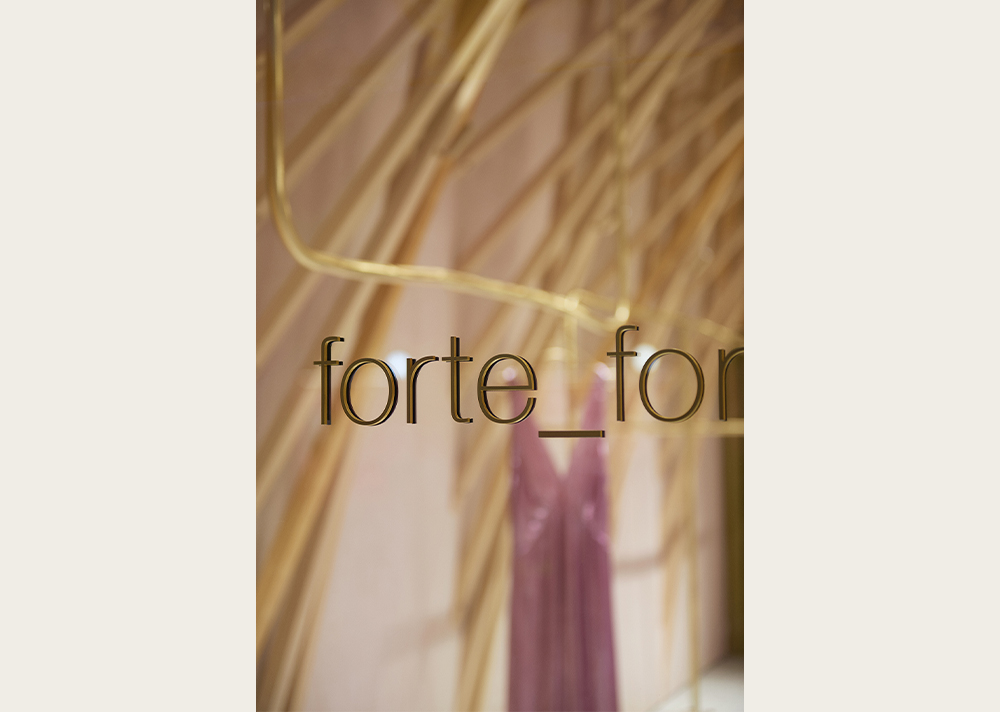