an onyx cube in the eternal city: forte_forte opens its boutique in rome

the forte_forte spatial narrative is an ongoing path in which powerful and present materials and pure forms – now airy and impalpable, now solid – are molded on the unique characteristics of the place. meaning by locus, not so much, or not only, the immediate surroundings, as the genius loci itself, and with it the city. from the creative dialogue between giada forte and robert vattilana a language is born which, following a rhythm and a metric that is different each time, becomes a lingo. the opening of the new roman boutique, at number 4c in via borgognona, in the heart of what was once the campo marzio, in a street full of character that welcomed harots and artists, marks a new chapter and affirms a new idiom, made of extreme synthesis, of a desire for power and permanence. the arrival in rome, the eternal city in which the stratigraphy of eras and styles can be read at every corner, in every stone, induces a reflection on matter. the focus is on contrast, because in rome contrast is always, and has always been, harmony.

in the city of travertine, forte_forte renounces one of the essential materials of its own grammar of elements in order to place amazement before redundancy. it is a surprise that is dry instead of baroque. in fact, the boutique looks like a vibrant monolith of green onyx, a precious material with a unique design that contains a thousand–year history in the loops of its marbling, and which thanks to the particular mineral structure dematerializes in contact with the light in a nuanced transparency. it is a stone that comes from afghanistan, an area of extinct volcanoes, and whose history is at least as long as that of the city.

treated in large symmetrical blocks and worked to obtain a matte surface, green onyx creates a total immersion in the shop: it drowns the entire space, from floors to walls. the entire perimeter of the scenic box is illuminated and marked by a cascade of light, while panels of polished brass folded in on themselves and anchored by brass stitching make up the back wall. in contrast, the ceilings are white in the initial part of the shop, with inclined and dynamic bands, while in the second they open in a geometric composition of luminous portholes. in such an affirmative space, the dressing rooms closed by brass hinged doors opened by portholes are a mysterious presence, which reveals feminine, boudoir–like interiors in sage–colored capitonné velvet.

the furniture pursues the idea of eclectic balance that is the acronym of forte_forte. the area in front of the dressing rooms is occupied by seats and a display wall for accessories with elements collected along travels: labradorite, jasper and pink quartz stones; a green jade; books and pottery. the two spaces are divided by a triptych mirror on the wall, while the ceiling features a large curved shield, painted in sage green. a circular bench carved from a block of agglomerate wraps in a cloud–shaped vase containing an alocasia plant with surreally giant leaves. the vegetal presence is a recurring, lively acronym, an integral part of forte_forte material grammar. the brass, worked as if by hand, thus alive, draws the hangers, the perimeter of the mirrors, the portholes of the dressing rooms with calligraphic lightness.

an idea of suspension that is both solid and impalpable dominates. the cash desk is located in the back of the shop, while the warehouse, accessed through a brass–framed onyx door, is organized with filing cabinets placed on rails, in a nuance of sage green.

the exteriors of the boutique, located in a historic building and under the protection of the superintendence of fine arts, are in travertine, opened by three identical gates, two windows and an entrance. sage green fixtures are a light and present touch.

the space is assertive but immaterial. the story, in large sentences, is hypotactic and full of ruptures. a sense of gentle power, of timeless lightness pervades the whole. 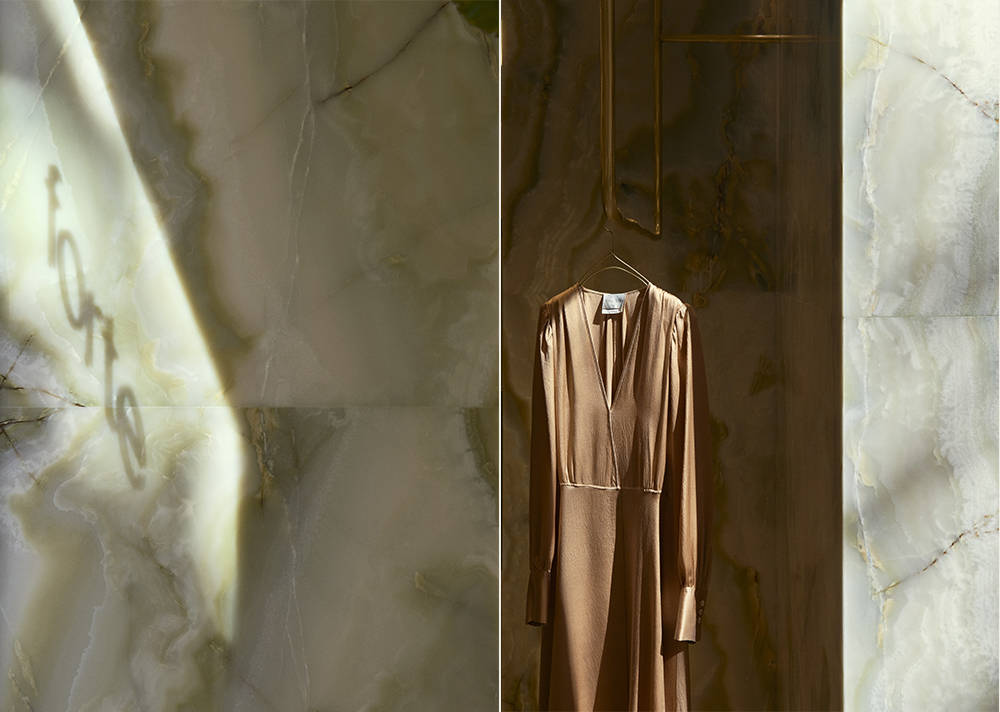 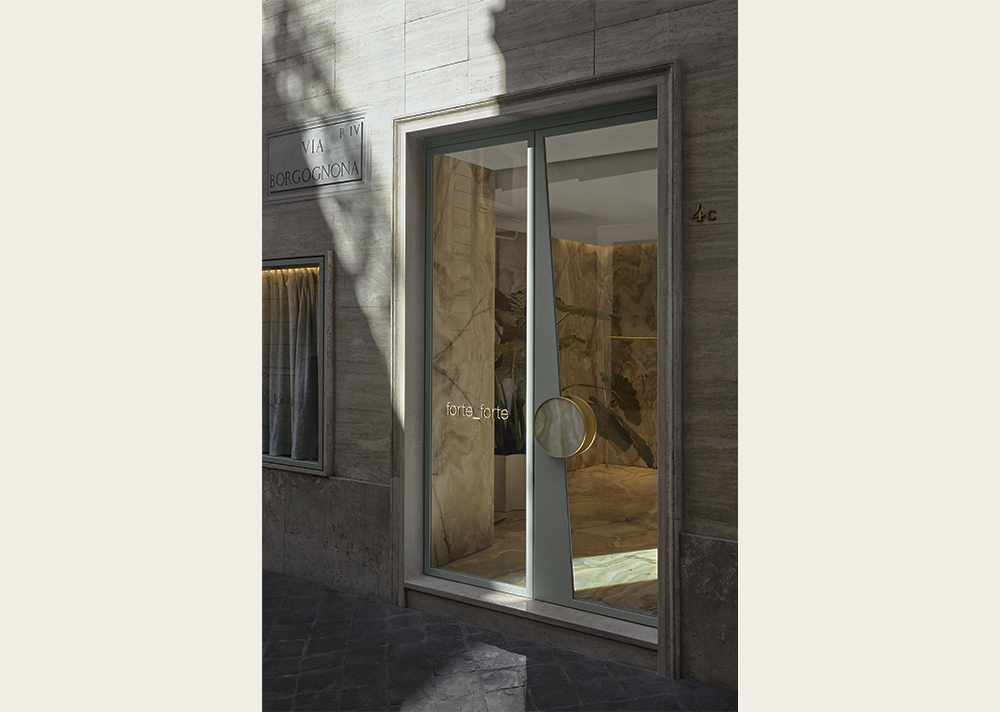 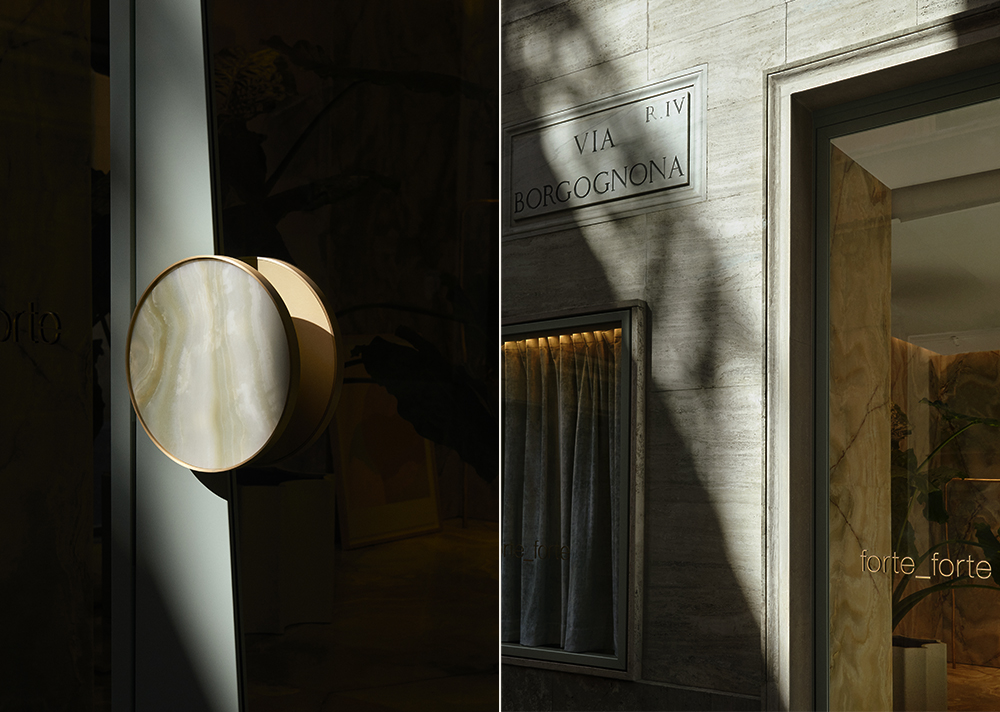 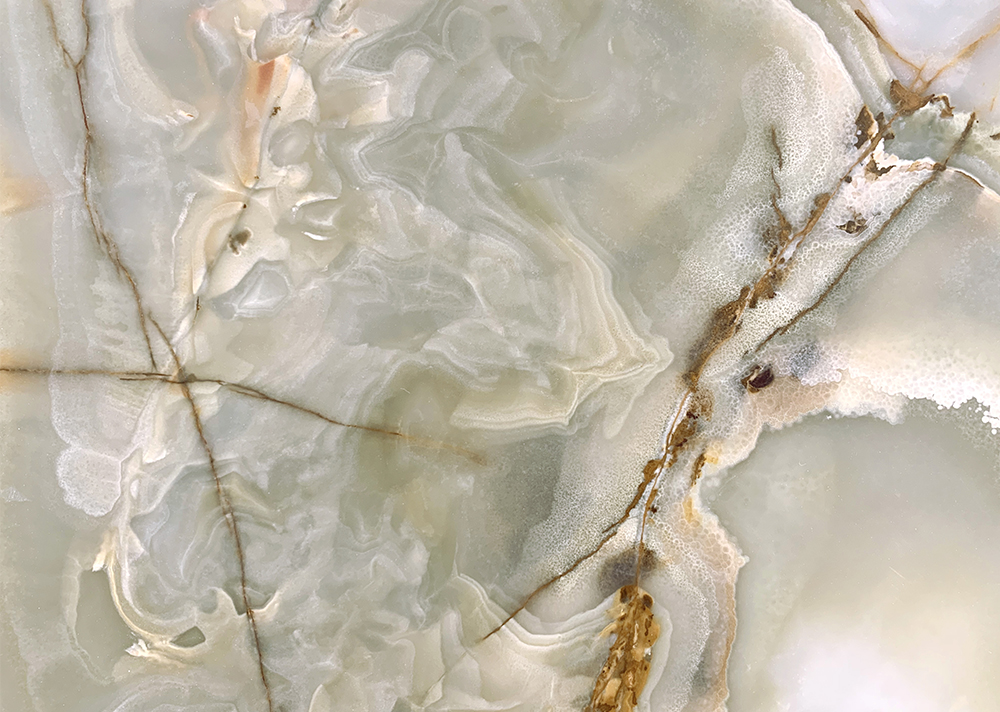 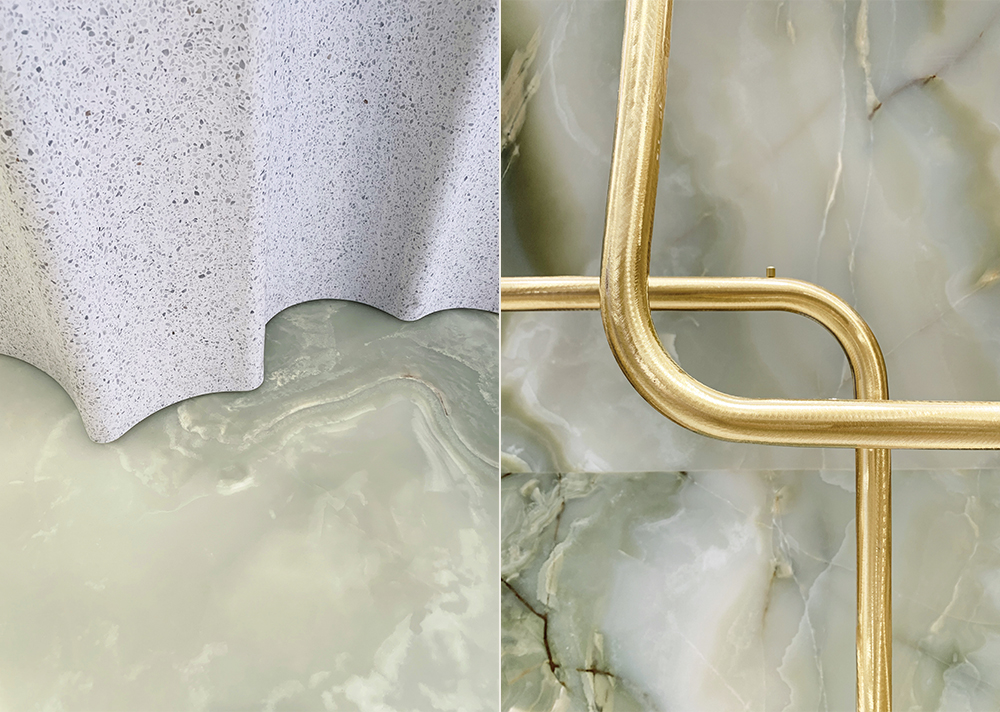 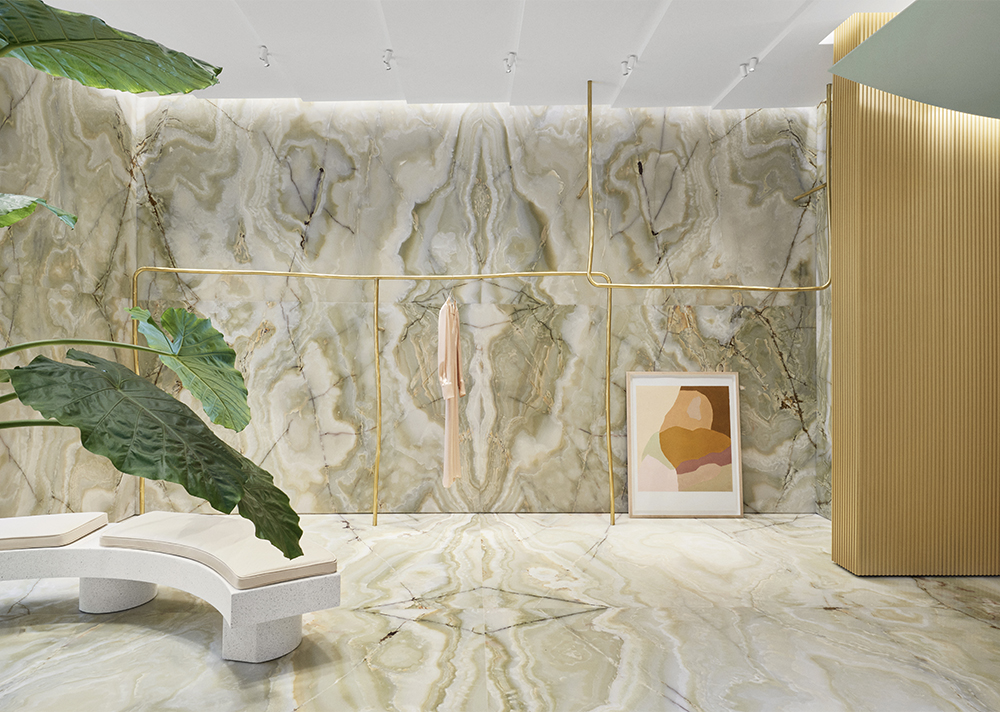 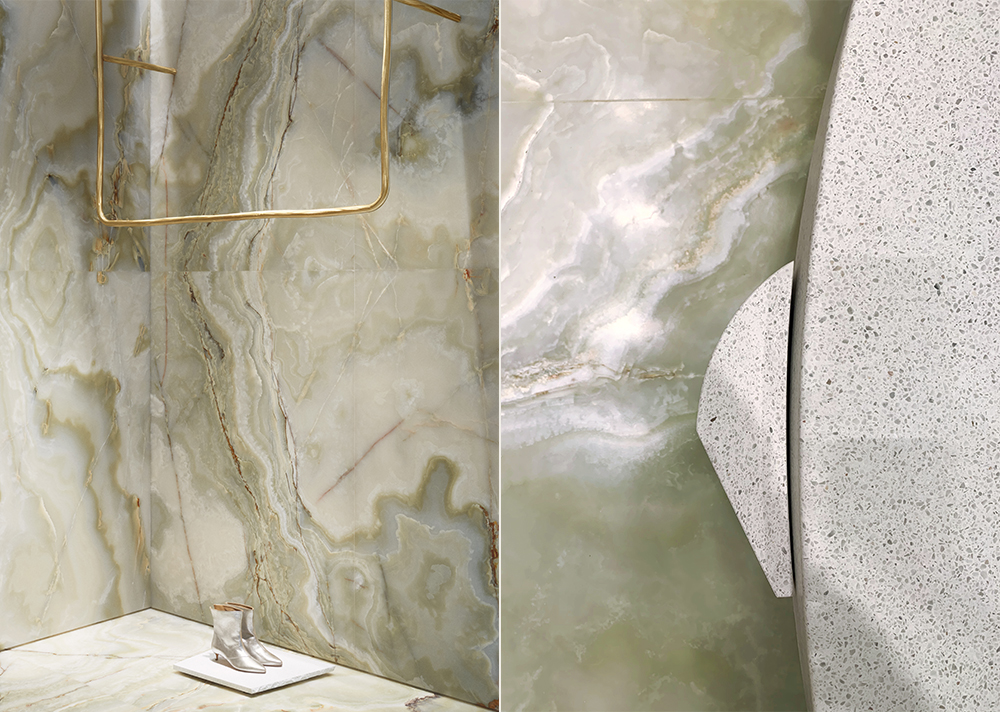 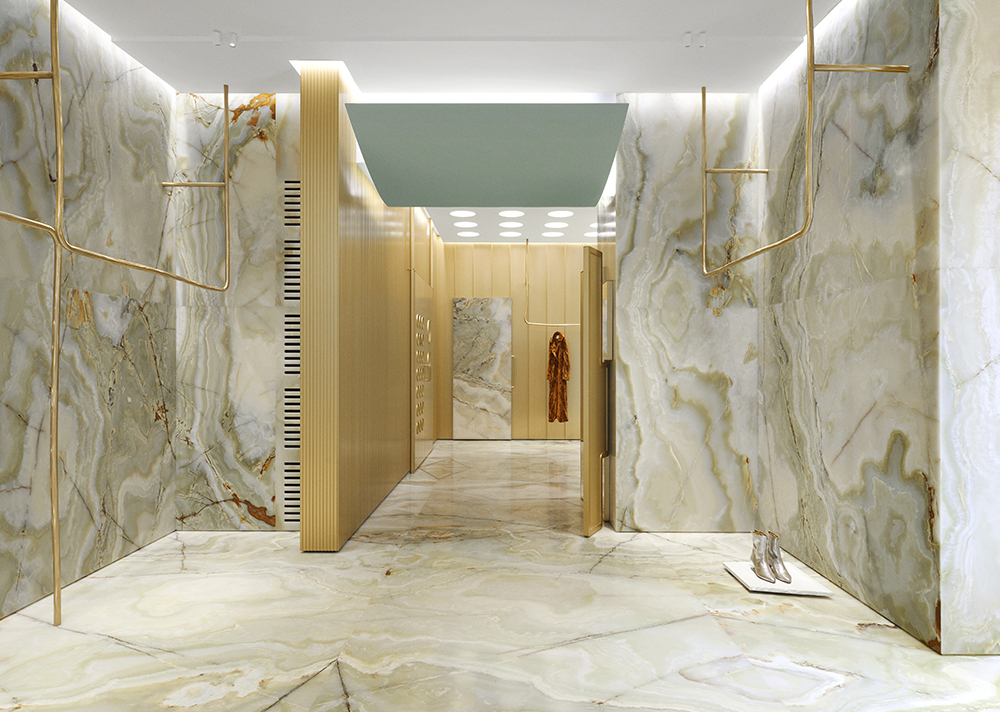 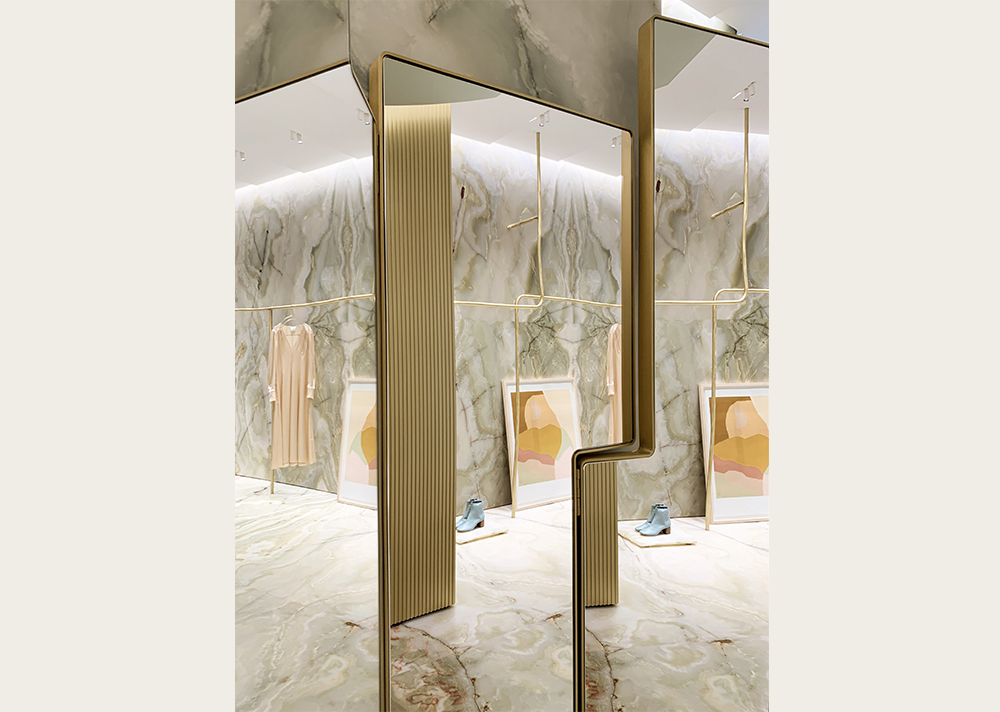 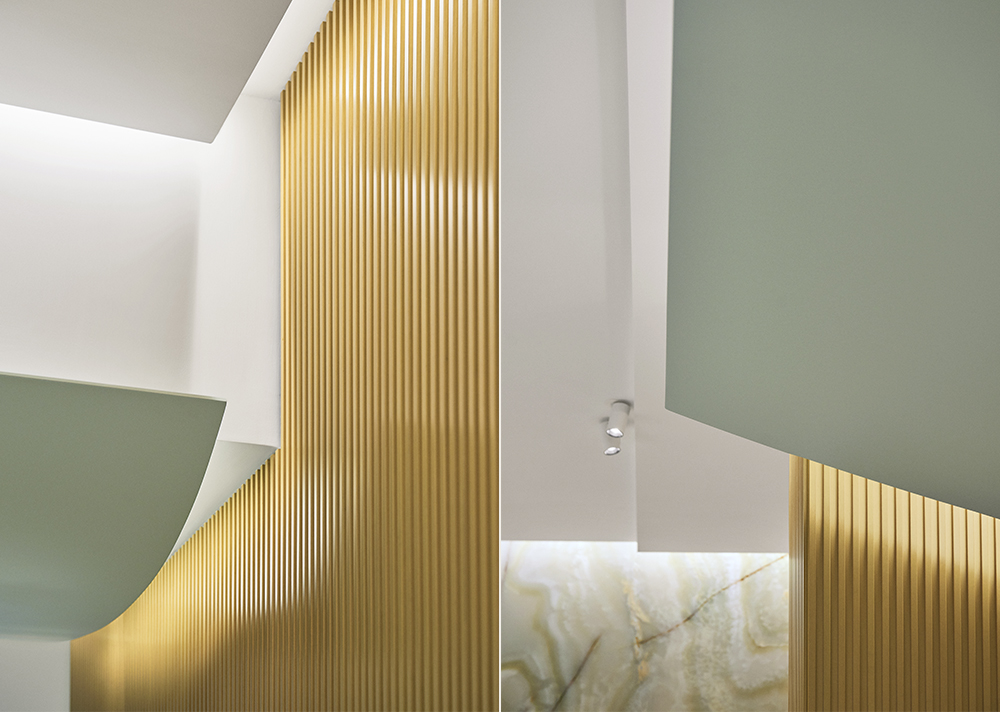 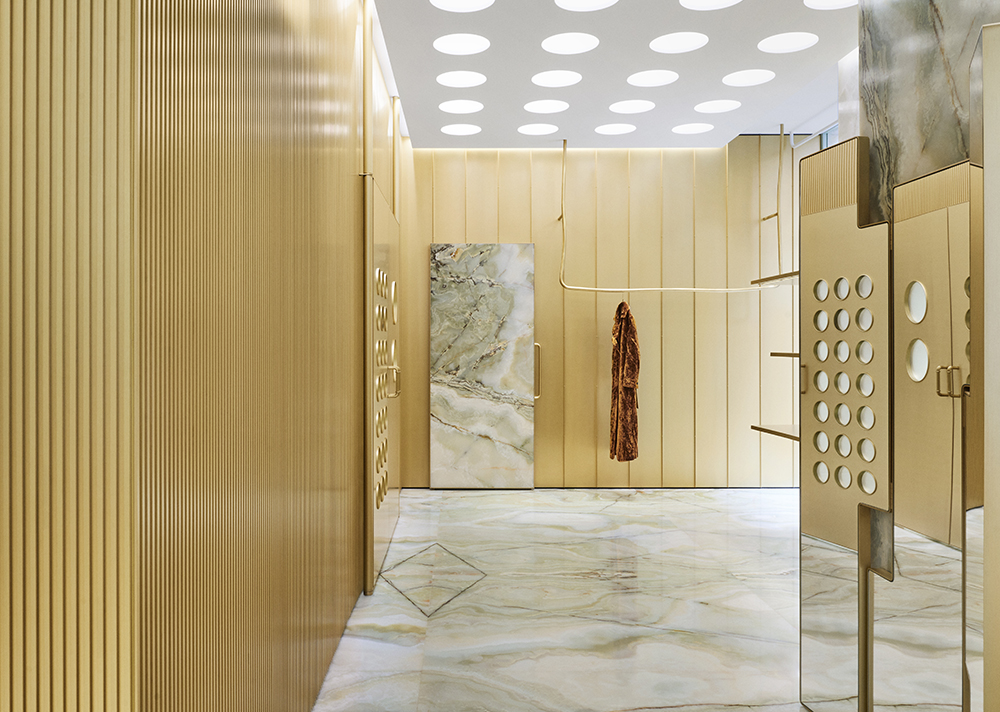 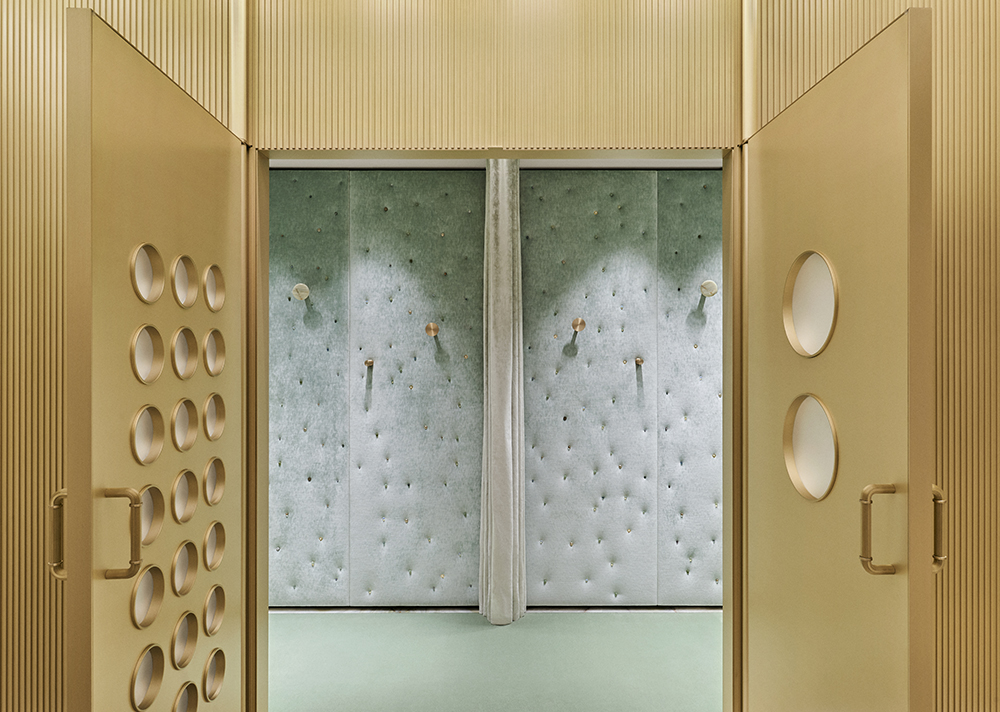 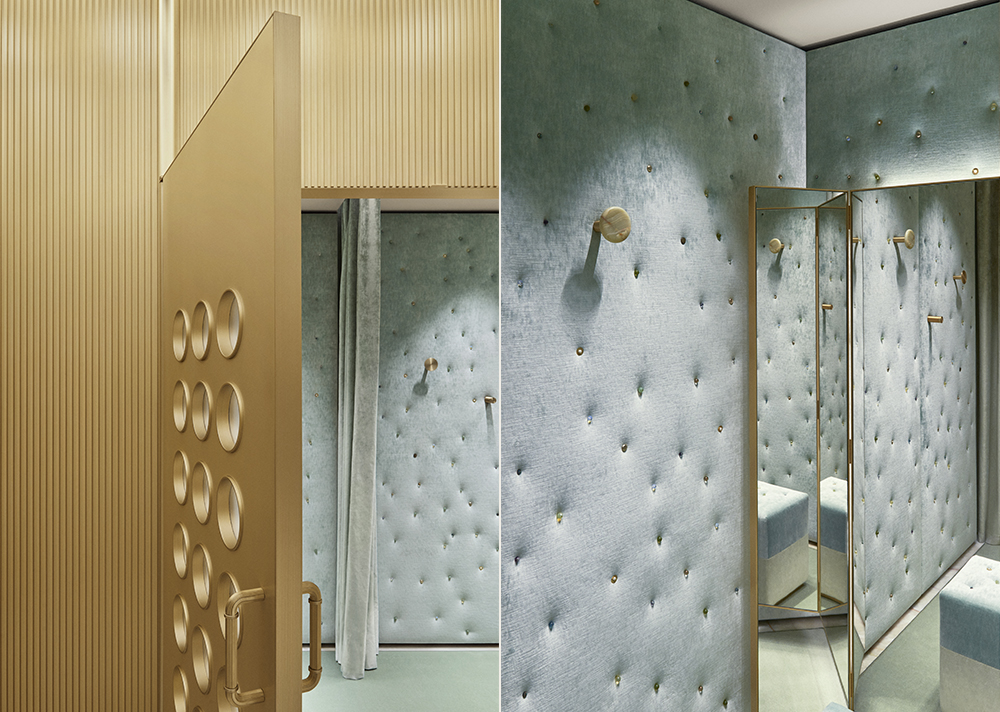 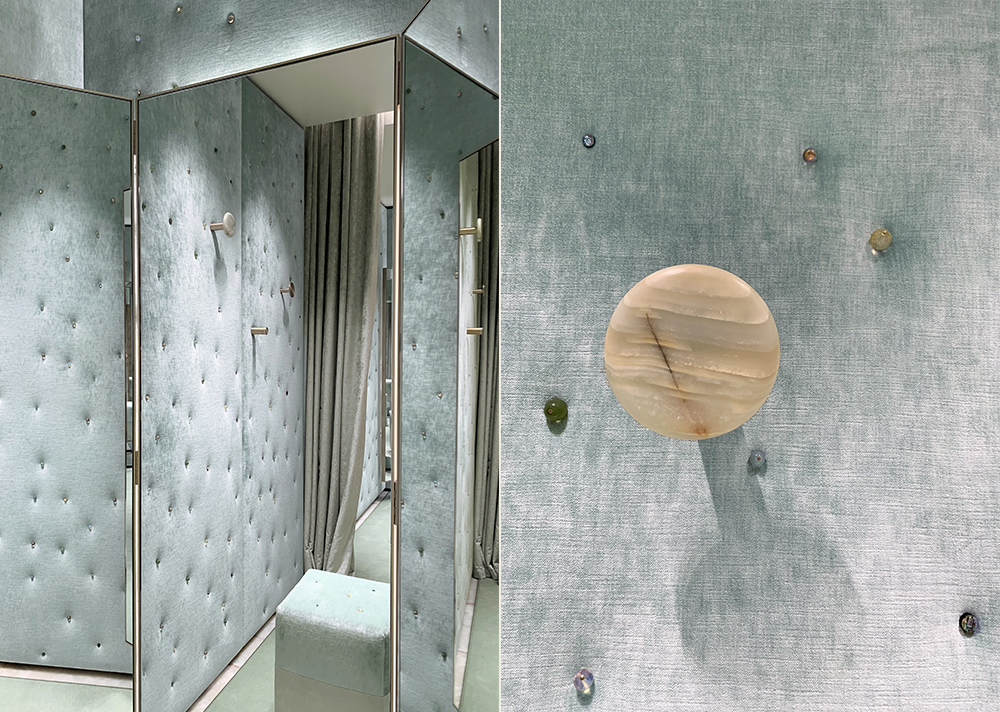 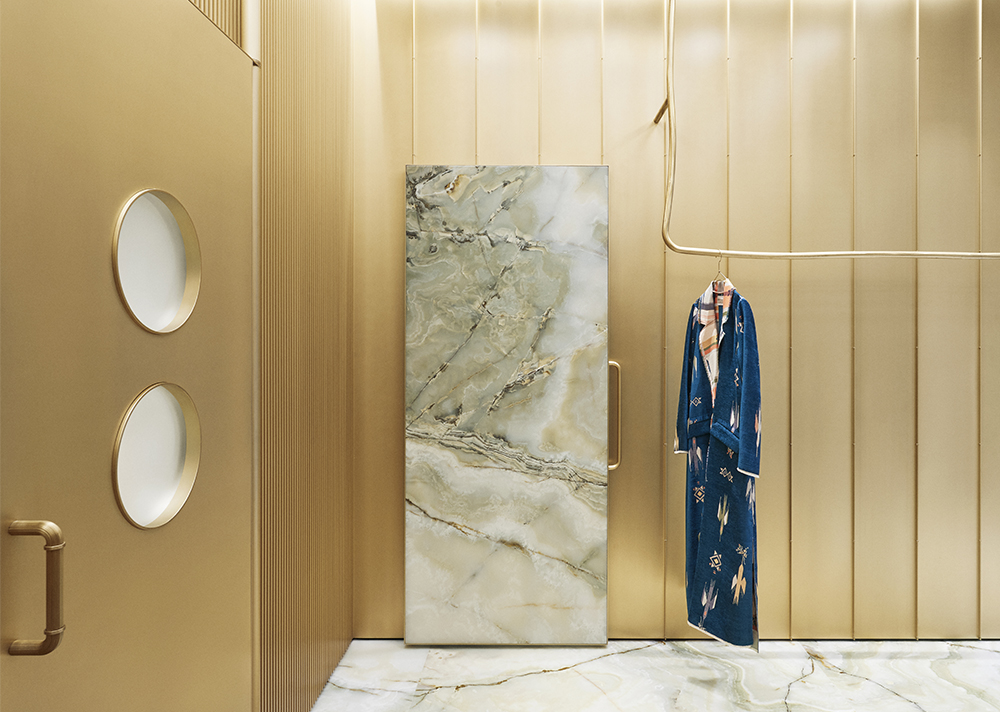 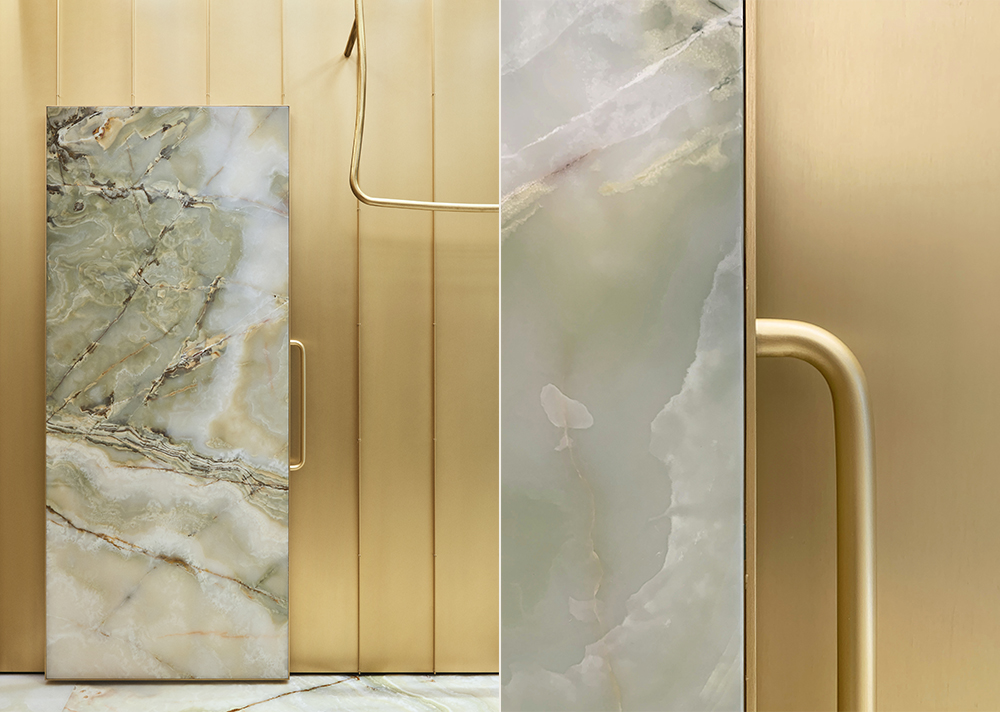 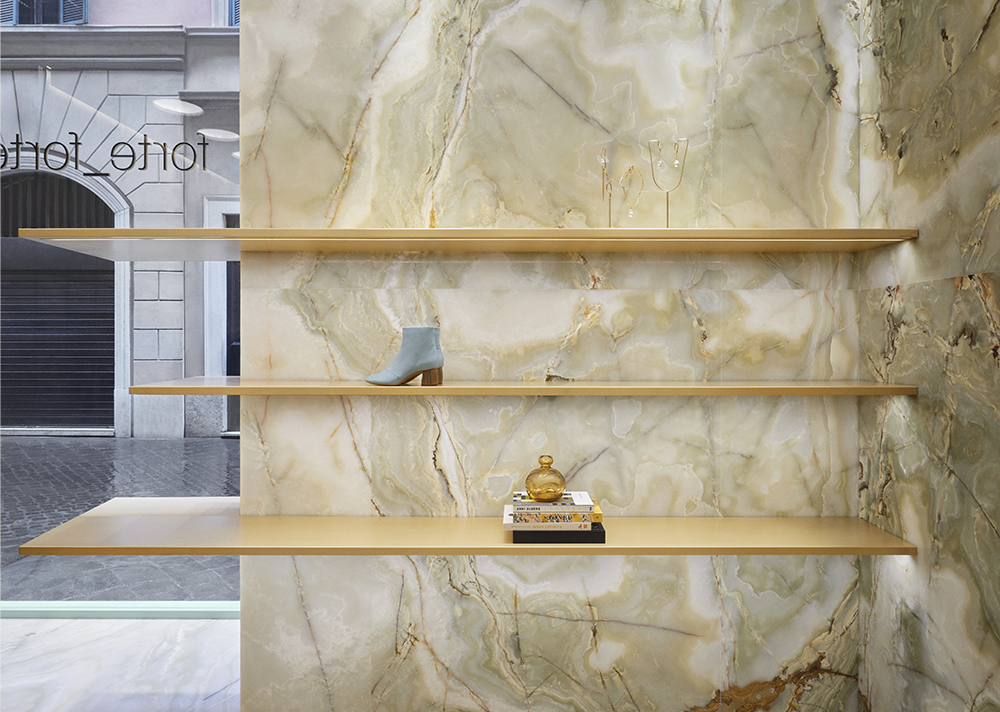 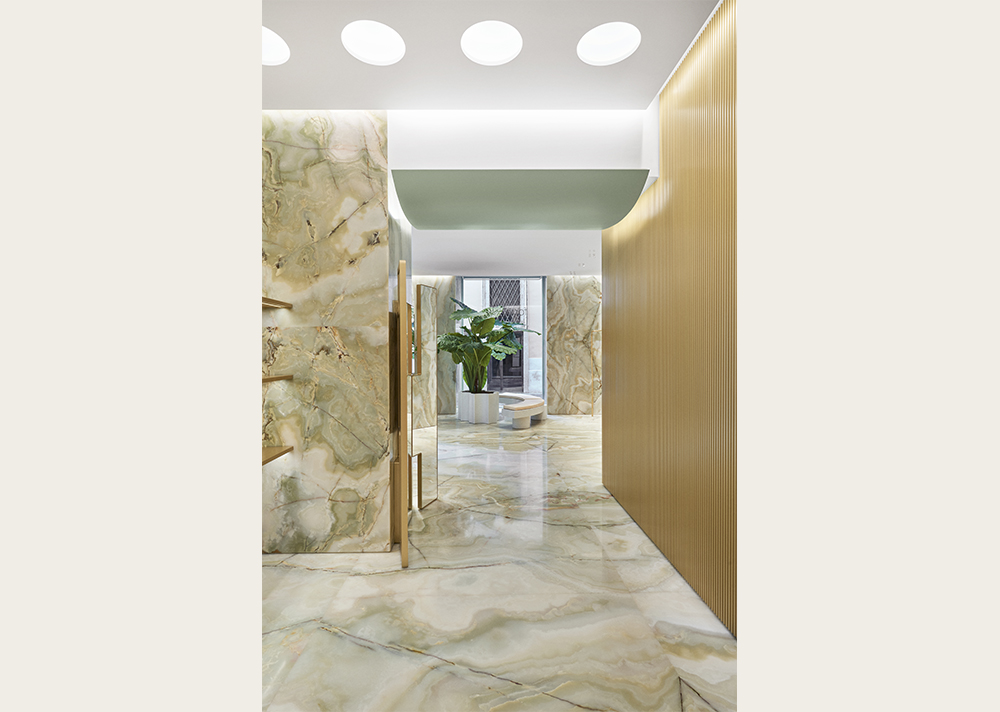 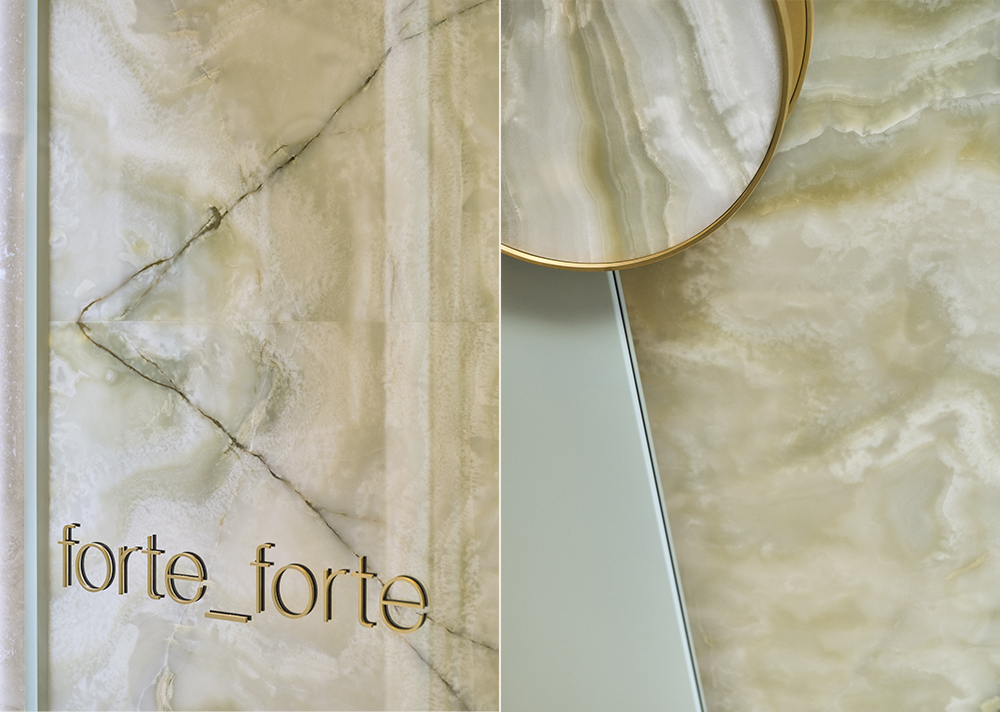