a melody of materials and colors in the forte_forte london boutique

telling a story through the materials, transforming the space into an atmospheric and emotional tale activated by a grammar of poetic textures and sophisticates colors. with the opening of the new london boutique, at 108 drycott avenue, in chelsea, forte_forte expands and further strengthens the narrative journey that began in milan and continued in paris. each new boutique, conceived by giada forte and robert vattilana, is a chapter that adds to the entirety of the fable, of which it retains the spirit adapting it to the singular uniqueness of the place.

in london, the lyrical and impalpable harmony that is the forte_forte signature softens a compact and deep architecture, toning down severity with a light and feminine touch. the long and narrow space is a succession of tactile and visual sensations that from the street leads by successive modulations of the interior to an open courtyard flooded with light: a small garden in which the protagonist is a broadly shaped japanese maple tree, whose changing of leaves during the year marks the alternation of the seasons with color, adding to the space the dimension of time and the serene but unrestrained vitality of nature, its cycle of constant generation and regeneration.

a musical succession of elements permeates the interiors. on the walls, the phrasing is defined by the classic brick, the red clay block associated with city buildings, arranged in a pattern of delicate overhangs and recesses that creates a pixelated texture and a play of shadows akin to light filtering through lace, passing seamlessly from the outside to the inside. this material expanse, at the same time compact and impalpable, is occasionally punctuated by inserts of gold leaf or turquoise craquelé ceramic that give a surprising touch to the visual and chromatic melody. the entire space, suspended on the terracotta floor in a delicate skin tone, is lit by the palpable warmth of slight imperfections, the result of hand-made treatments and finishes.

the protagonist in the furnishing elements, in the cash desk, in the large carved vase, is ceppo lombardo, a stone with a composite and strongly tactile, opaque hand which is usually associated with italian rationalism, making for a contrast with the clay of the bricks. the precious yellow onyx warms up the chromatic narrative, defining a long step that, behind the cash desk, acts as a display element. brass is the sign that recurs in the material grammar of forte_forte, a calligraphic trace that lightly draws the outline of hangers, the perimeter of the mirrors, the portholes and the silhouette of the dressing rooms, the clear geometry of the staircase suspended and hung behind the cashier desk and made of bent metallic blades. the juxtaposition of materials stimulates both touch and sight with the transparent intangibility of the curtains, the voluptuous density of the capitonné velvet of the dressing rooms, as welcoming as a boudoir but closed by almost industrial hinged doors in frosted brass, the classic and masculine presence of the leather seats. mirror triptychs, chaise longues and armchairs with a modernist design create a welcoming atmosphere and a sense of domesticity, highlighted by the luxuriant and exotic alocasia and monstera plants, by the modulated ceiling that filters the light. slight artistic presences, as accumulated during travels, enchant and entertain: two small sea view paintings, imaginary postcards from exotic and distant places, two table sculptures with a sinuous profile, and then the ceramics by aldo londi for bitossi, colorful, surprising and delicately kitsch.

the feeling is to enter a place that keeps moving instead of being static, run by a sense of surprise and discovery: a fluid, ever changing container in which harmony is born out of contrasts, sealed with a gentle but assertive touch. 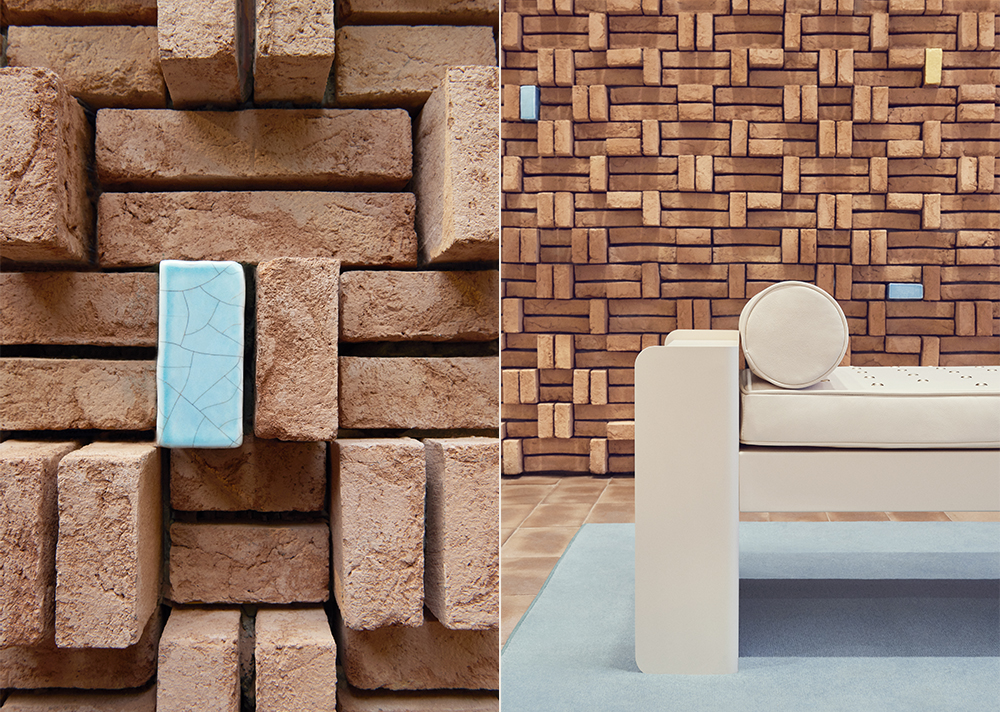 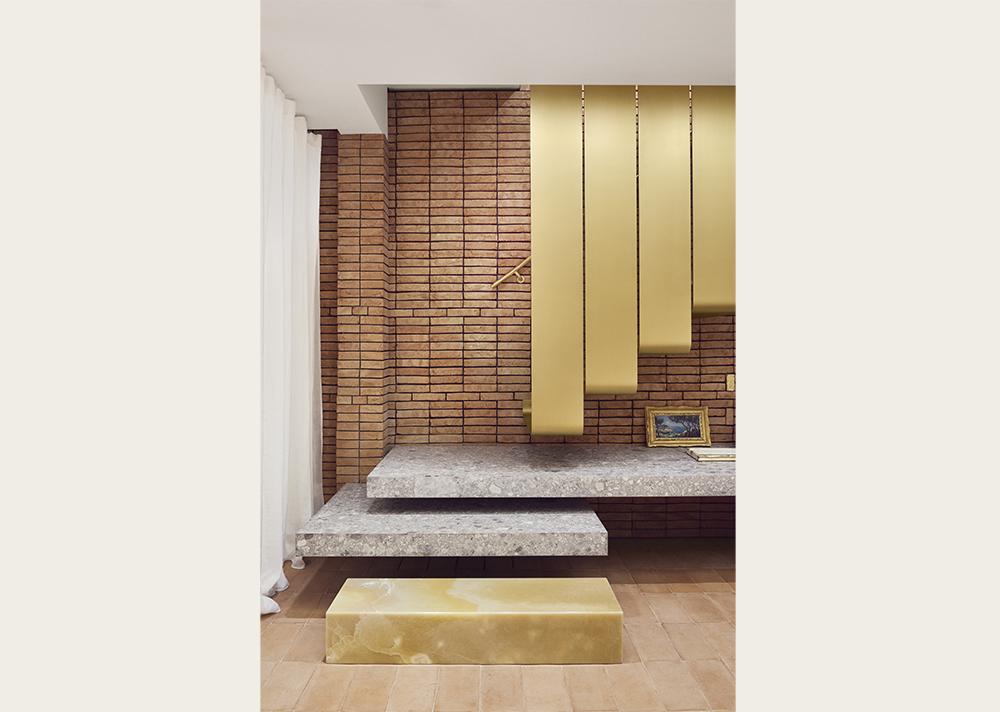 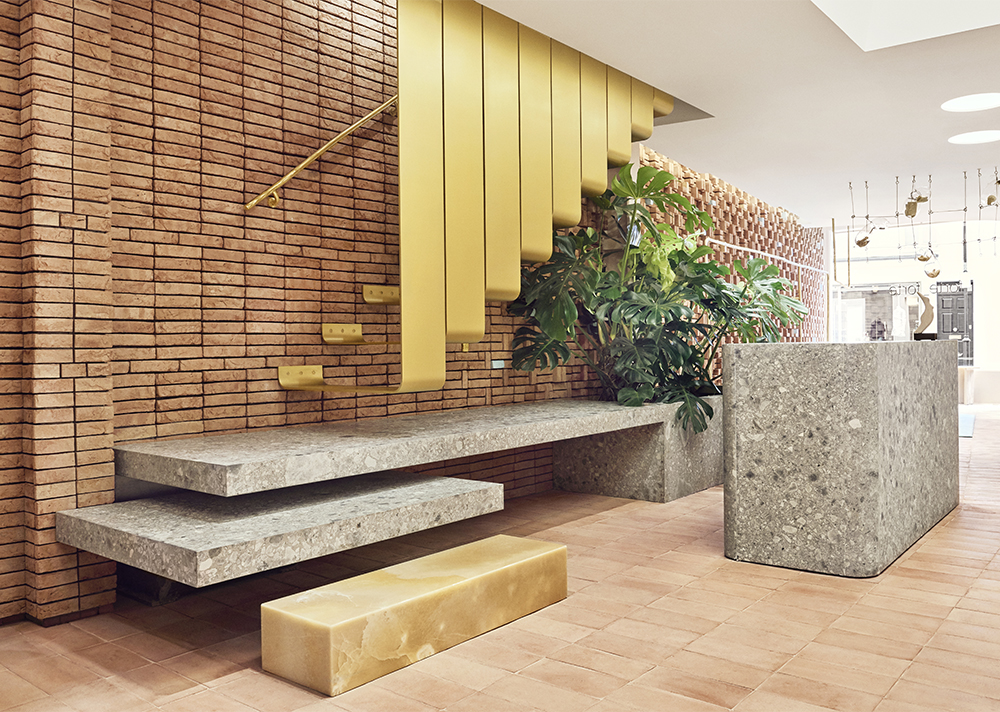 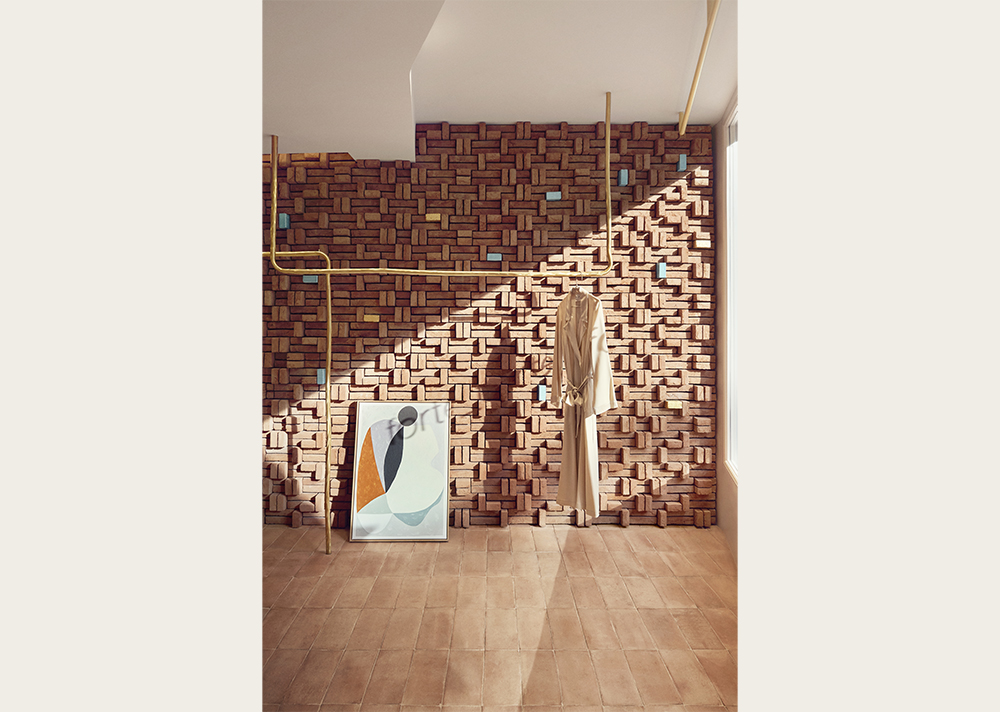 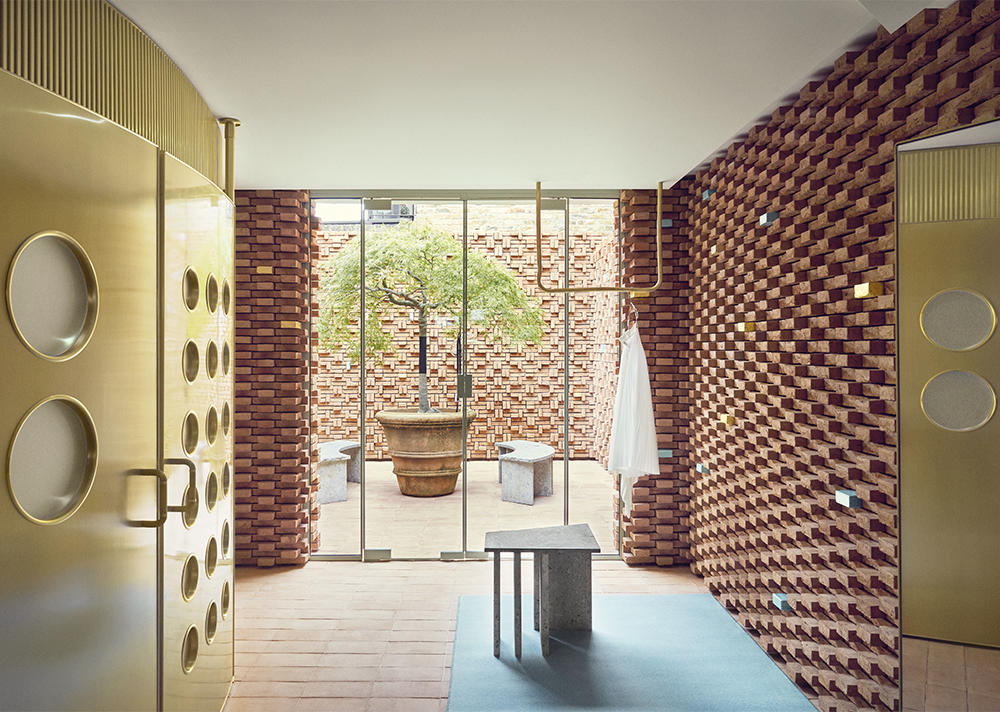 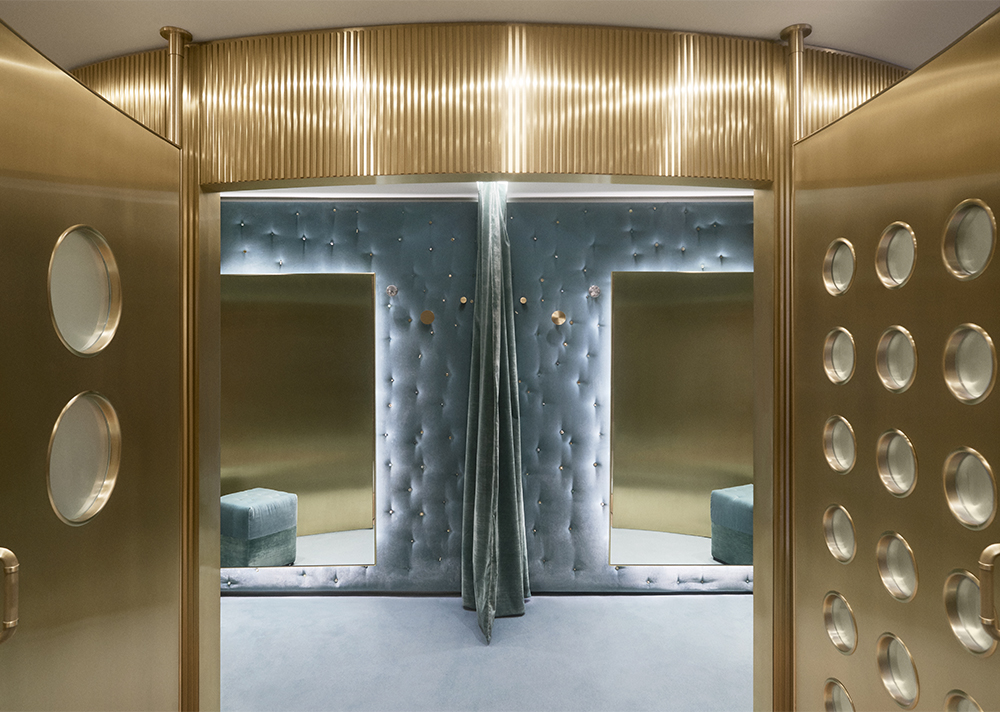 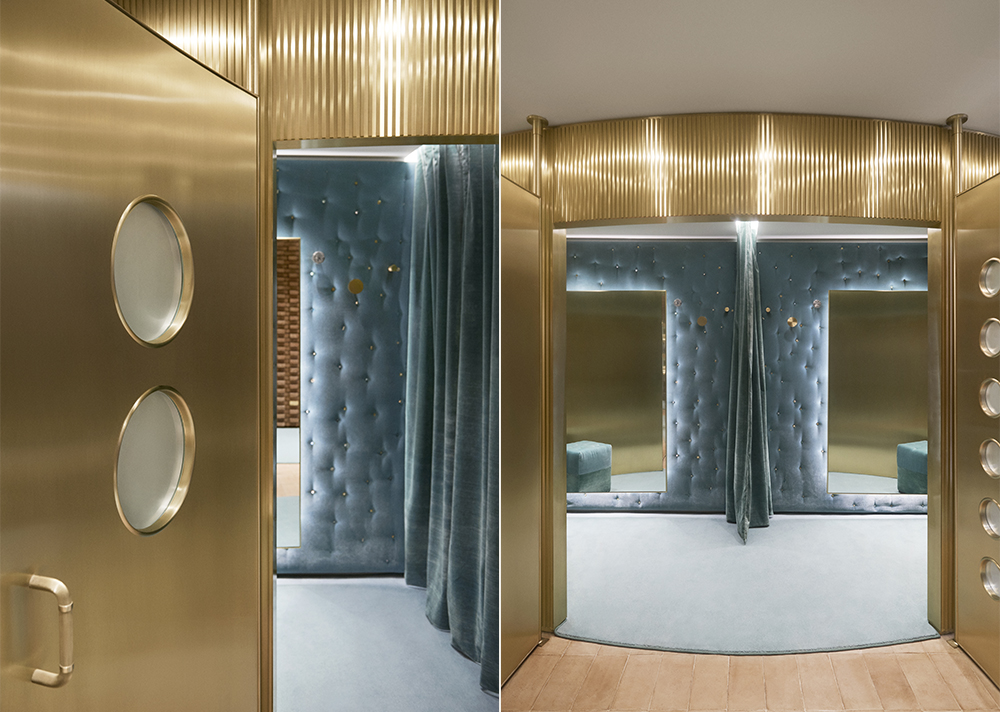 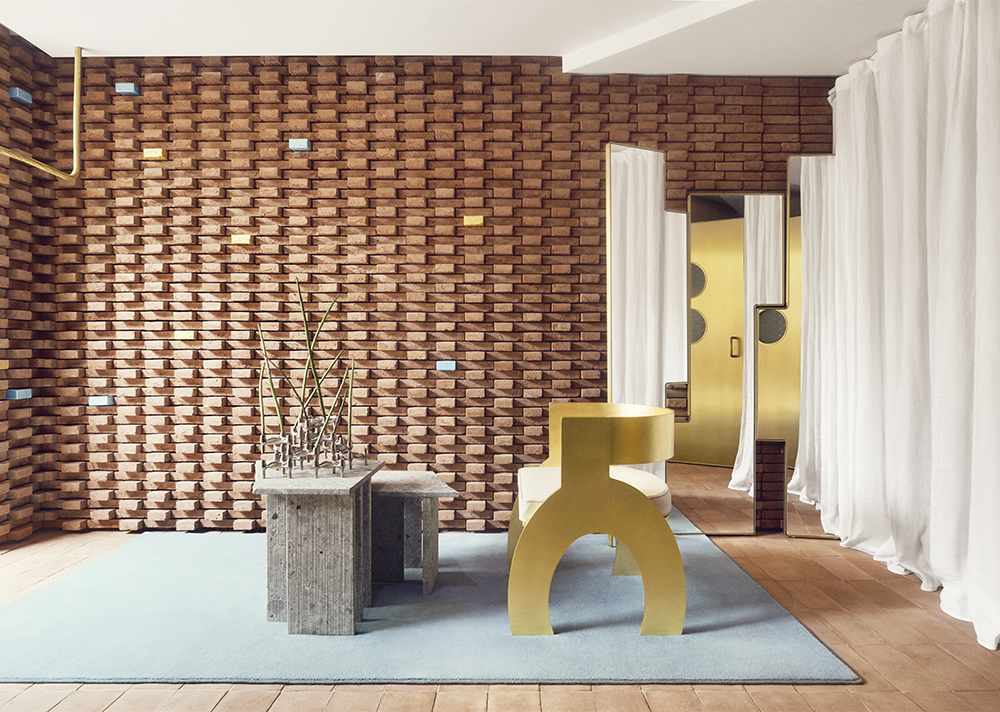 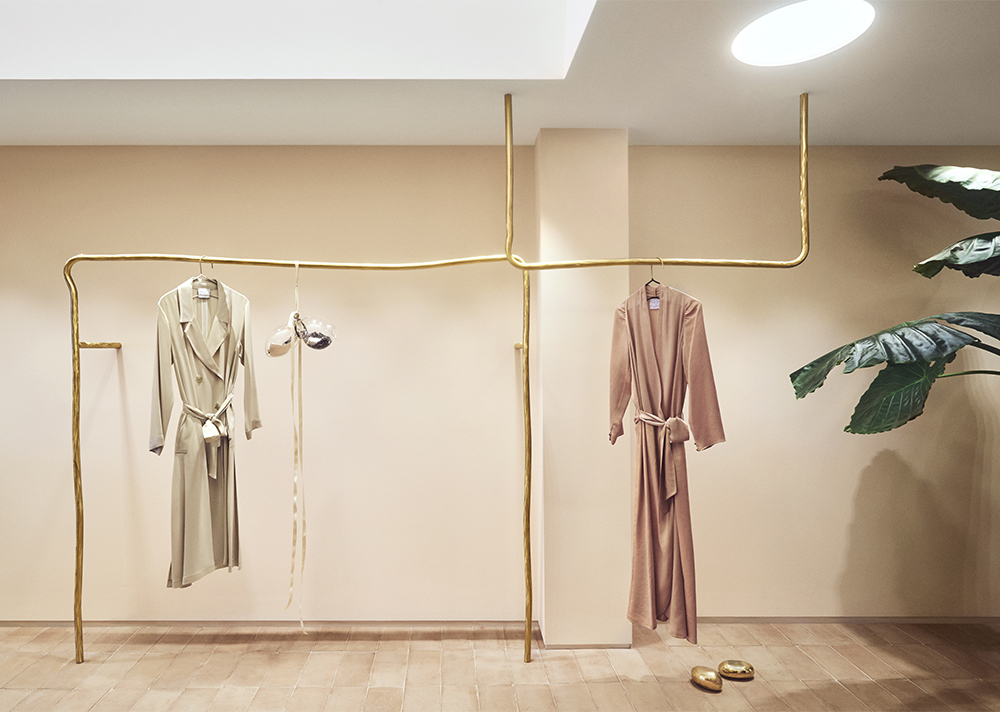 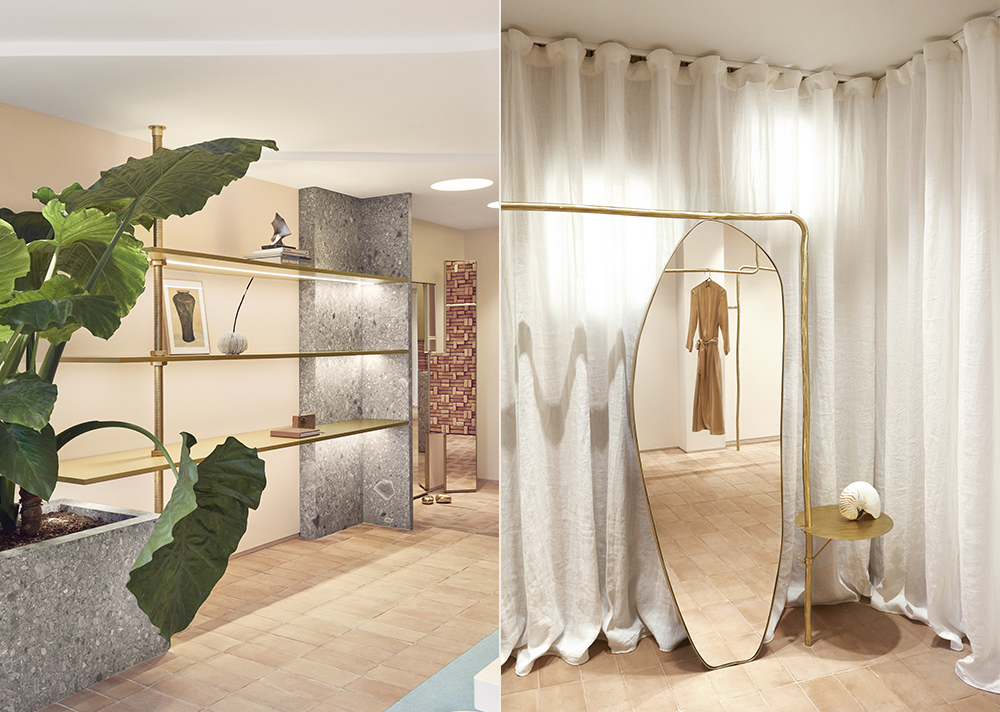 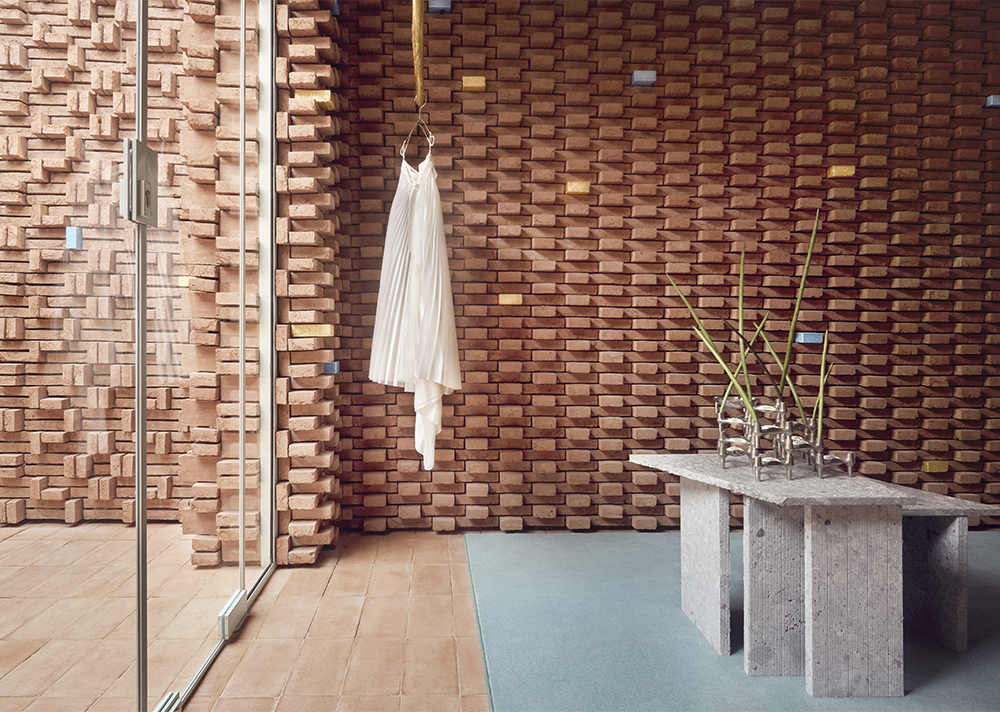 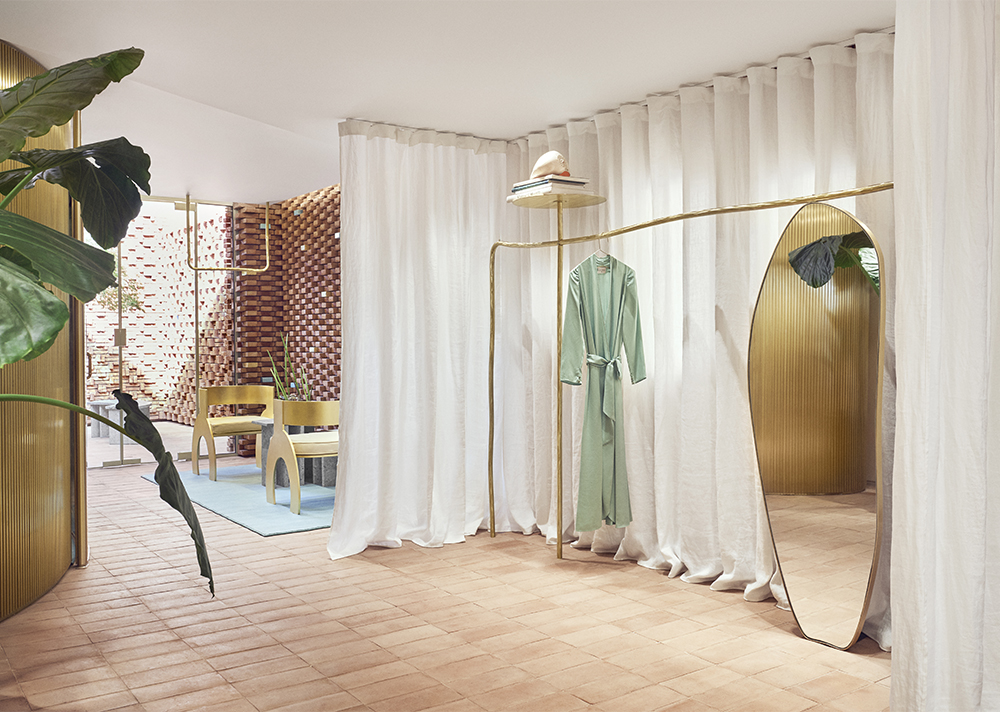